Since yesterday, a robot walking the streets of a city has been watching the passers-by from the wall of the building in ul. Józefińska 24. “From him perspective, the everyday hustle and bustle is amusingly pointless; he sees the things that define our existence as mechanical (ironically) walking in circles. The permanence of his image shows the relativity of time. Our day is but a second to him, and during this second we can go past him several times with no reflection. He stands horribly lasting, indestructible, immobile: great, powerful, eternal, an idol of the modern age,” Filip Kuźniarz, the author of this new literary mural produced in the Podgórze district, says. The robot and the world are also watched by Stanisław Lem, whose works have inspired the creation of the mural. The mural is another joint project of the ZNACZY SIĘ New Art Foundation and the Krakow Festival Office, carried out especially for the upcoming great literature feast: the Conrad Festival. The opening of the exhibition will take place on the first day of the festival (Monday, the 22nd of October) at 4 p.m. See you there! 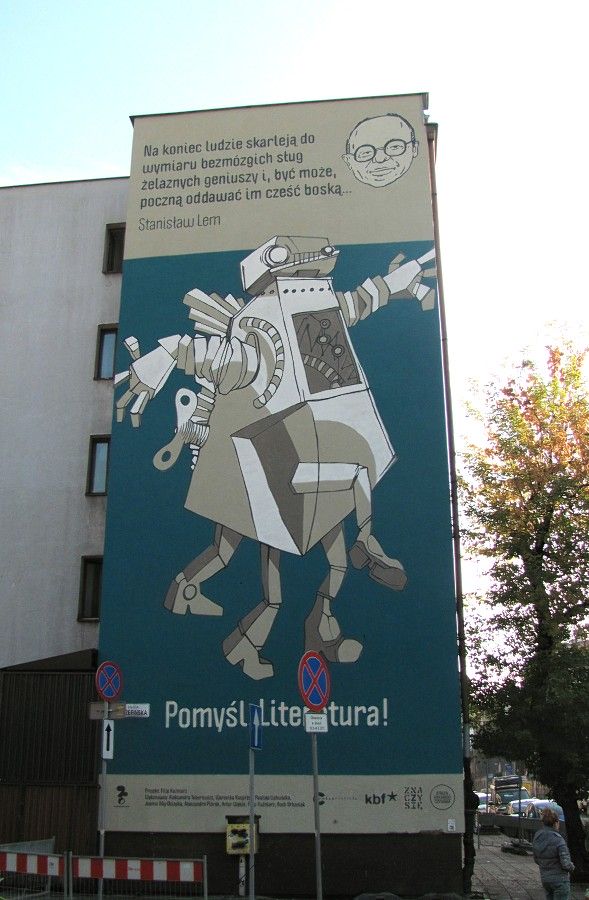 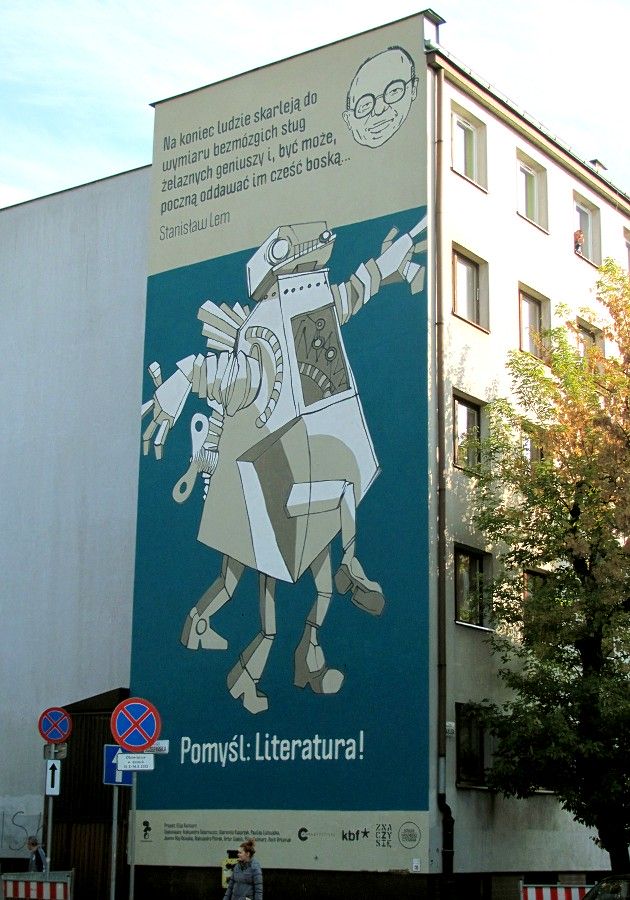 The mural is yet another activity in the Podgórze district by the Foundation and the Krakow Festival Office. Last autumn, ZNACZY SIĘ organised a workshop on producing murals. Hosted by experienced Krakow artists, they allowed for selecting a group of people, which – under the lead of Aleksandra Toborowicz (mural design/organization) and Artur Wabik – created the monumental TYPOMURAL at ul. Traugutta 3a in Kraków, close to the AUSCHWITZWIELICZKA sculpture prepared by Mirosław Bałka and the Museum of Contemporary Art in Krakow (MOCAK) for the first edition of the Art Boom festival. The TYPOMURAL, depicting a shelf full of books, decorates the wall of the building and has become an important place in literary trips around the city.

The latest mural, Think: Literature!/Lem by young artist Filip Kuźniar is a reference to the works of Stanisław Lem, one of most recognisable Polish writers with ties to Krakow. The mural is focused around the quote from Dialogi (Dialogues) published by Wydawnictwo Literackie in 1957 and reissued in 1984.

“Consider, please, what disastrous prospects this possibility creates. For some more time, the increasingly powerful electrobrains will continue to carry out tasks that humans can understand, embrace, comprehend, at least more or less. Then, the discrepancy will grow. Thinking machines will present us with the results of their theoretical deliberations that we could, perhaps, use, but we could never understand. The scope of the phenomena taken care of by the automations will expand. In the end, humans will be reduced to brainless servants of iron geniuses and perhaps will start worshipping them as gods…”


(Stanisław Lem, Dialogi, Wydawnictwo Literackie 1957)
This quote foretells the ominous results of technological development for humanity, for the power of human brain, for thinking, reading, associating facts. The diagnosis expressed by Lem’s character, Hylas, almost 55 years ago seems particularly relevant in the world of today.

“I have picked this passage from Lem to show the prevailing trait of all of us contemporary people: entanglement in the pursuit for more and more advanced technology, amassing electronic artefacts, constantly expanding the boundaries of human creation, which I would call a haughty attempt of trying to be like God,” Filip Kuźniarz says.

The title of the mural corresponds with the motto of this year’s edition of the Conrad Festival (starting in just a week, on the 22nd of October): Think: Literature! As used by Filip Kuźniarz, the motto is given new, unsettling relevance, making us reflect about the world, its problems, about ourselves. This is because “literature is not just light entertainment, but also an invitation to distance ourselves from the charging world, from opaque reality, from trivialities and clichés that surround us on all sides. The motto's another meaning is equally important: it is difficult not to marvel at the fact that in a world dominated by haste and superficial information, literature – the art of fiction and hope – still exists and continues to provoke conversation,” as Professor Michał Paweł Markowski explains the motto of the festival.