16 November 2013 We know the winners of the poetry award

Two young poets: Krystyna Dąbrowska and Łukasz Jarosz have just become joint winners of the Wisława Szymborska Award. Dąbrowska was honoured for her volume Białe krzesła (published by the Regional Public Library and the Culture Animation Centre in Poznań), and Jarosz for Pełna krew (Znak Publishing House). The winners are young poets, born in the 1970s. The path to poetry was a rather winding one for both of them. Dąbrowska is an artist, she studied graphic design at the Warsaw Academy of Fine Arts. She compares herself to a painter who sketches faces and landscapes, but uses words instead of strokes of paint. Jarosz works as a teacher in Olkusz and plays the drums in several rock bands. He says that he is a better musician than he is a poet. Dąbrowska debuted in 2006 with a volume entitled Biuro podróży, her next volume waited two years to be published. Jarosz writes a lot and regularly publishes his works – Pełna krew is his sixth volume of verse.

This year’s winners of the Wisława Szymborska Award function beyond the literary environment, they are loners and outsiders by nature, they rarely appear at literary festivals and book fairs. Their manner of writing is completely different, though: Dąbrowska is far from expressive, she speaks with a quiet voice. Jarosz, in turn, selects expression, he tries to make the world manifest in his poems. She is withdrawn in her poetry, she hides behind the images she describes; he writes about himself, about the world, and himself in it. She is cool, transparent, polishes up her phrases. Him – expressive, immersed in experience. The contrasts are countless, but what both poets have in common is the manner of talking about the world: searching for the non-obvious, noticing the entirety of a phenomenon in a detail, focusing on everyday life. They both lean towards presenting things related to death, disease, weakness, the passing of time. Dąbrowska ponders over how to live in the line of fire, on war-torn earth; Jarosz spins his tale about the passing of time using the example of women from his own family. They both can also capture the joyful elements of life: Dąbrowska writes wonderfully about how love makes people equal, deprives them of ambitions; Jarosz devotes a brilliant text to his feelings for his daughter.

They also have extraordinary distinctiveness in common, they are strong, independent voices. The jury of the Wisława Szymborska Award distinguished just that – their sovereignty, ability to write outside of the trends, and relentless searching for their own artistic path. These qualities were highly valued by Wisława Szymborska, who invented the literary award and established the Foundation in her will.

Krystyna Dąbrowska – born in 1979. She debuted in 2006 with a volume entitled Biuro podróży. She studied graphic design at the Warsaw Academy of Fine Arts. She publishes her works in Kwartalnik Artystyczny, Gazeta Wyborcza, Dwutygodnik, Odra, Twórczość, and Kultura Liberalna. Translator of English literature: Williams, Yeats, Hardy, and Gunn; she published her translations of poetry in Literatura na Świecie. In 2012, she published her second volume of poetry – Białe krzesła – under the imprint of the Public Library and the Culture Animation Centre Publishing House.

Łukasz Jarosz – born in 1978. Poet, musician. Drummer, singer, and lyricist for groups such as: Lesers Bend, Chaotic Splutter, Panoptikum, Katil Ferman, Mgłowce, and Zziajani Porywacze Makowców. Author of six poetry volumes: Soma (2006), Biały tydzień (2007), Mimikra (2010), Spoza (2011), Wolny ogień (2011), and Pełna krew (2012). Winner of many poetry competitions, including the Krzysztof Kamil Baczyński, Rafał Wojaczek, and Rainer Maria Rilke competitions. His debut poetry book Soma was honoured with the main prize at the Witold Gombrowicz Competition for Young Creators organised by the Culture Foundation and received the Golden Means of Poetry award for the best poetry book debut (2007). His poems have been translated into Croatian and Italian. He has published his works in Tygodnik Powszechny, Gazeta Wyborcza, and Twórczość, among others. He lives in Żurada near Olkusz. 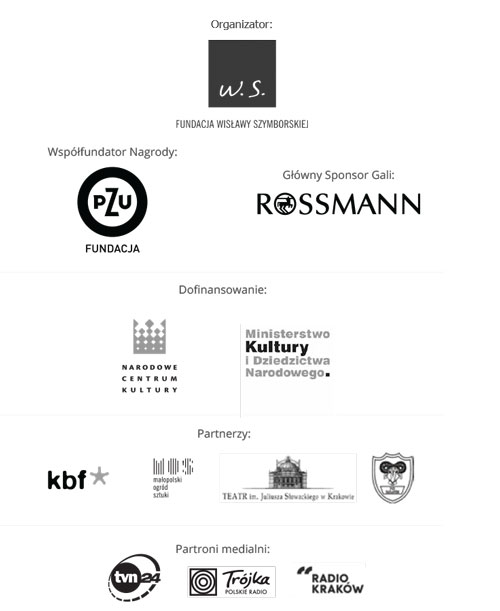