6 September 2016 Languages – the first day of the Conrad Festival

One of the possibilities of expanding one’s own world is to become open towards diversity. On the first day of the festival we are going to look for it in the language, or rather, in languages. The intensity, as the idea of the Festival, will sound even stronger thanks to new graphic design.

“We want to go to the cellar and wait through the coming of history, like people used to wait through the air raids in the past. But it’s not going to happen. We are too small, and the world has become too big”, diagnosed Andrzej Stasiuk, with whom Aleksander Nawarecki will talk during this year’s Conrad Festival. One of the possibilities of expanding one’s own world is to become open towards diversity. On the first day of the festival, the 24th of October, we are going to look for it in the language, or rather, in languages.

The intensity, as the idea of the Festival, will sound even stronger thanks to the overall graphic design, prepared by Fish Ladder and Paweł Marcinkowski of Platige – an artistic conglomerate, cooperating with prominent artists, including Tomasz Bagiński. 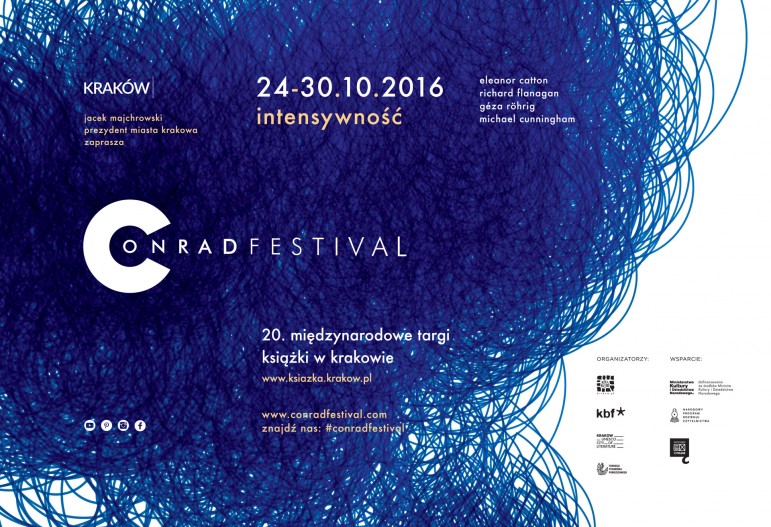 Language is something more than just linguistic skills – it is about a linguistic image of the world, imagination and cultural patterns, which we use every day. Can we ever speak the same language? What is its nature? To what extent is language our own, and to what extent is it a common good? The first day of the Festival will be dominated by these questions.

Ryszard Koziołek, a writer and literary scholar, and Michał Paweł Markowski, artistic director of the Festival, literary researcher and essayist, will discuss how to think literature. We have become used to the bright side – reading, which allows us to develop harmoniously and makes us better. But do we even think about how often it also unleashes our darkest instincts and how often we cannot recognise ourselves because of it? The intensive experience of reading calls for thought and reflection, only then it can make us better. Reading is a great responsibility and – sometimes – a risk.

This risk will be experienced by the participants of the festival, when reading the books of authors nominated for the Conrad Award – the first distinction in Poland aimed at supporting new writers, and encouraging the readers to take interest in young prose. What languages for describing the world are proposed by those who come to the readers with their own new proposals for experiencing the world? The participants will not only be able to see that for themselves, but also vote for the author of the best debut.

Literature teaches us how to look at the world, assigns meanings to reality. It also makes our experiences more intense, allowing us to go beyond the known patterns. How does it happen? We will find answers to that question during the meeting titled “Literature, or the 18th camel”. We will learn the slightly extravagant, and perhaps the most accurate definition of literature among those coined so far, and Agata Bielik-Robson, Grzegorz Jankowicz and Piotr Paziński will discuss it during a meeting conducted by Weronika Szwebs and Jakub Misun.

However, it is not the end of riddles and discoveries during the festival. If you want to know how did the entire modern French literature come to be, come to an exceptional meeting with OuLiPo – a legendary literary group, featuring Marcel Bénabou, Frédéric Forte and Ian Monk. And if you can, just stay with us for the whole day. The programme also comprises a concert featuring Andrzej Stasiuk and Mikołaj Trzaska, and a film programme in the Kino pod Baranami.

The graphic design accompanying the festival every year always tries to reflect the idea of the event in an imaginative way. The vision of the creators expresses the spirit of the Conrad Festival in a specially inspiring way.

The slogan “Intensity” is fascinating and straight up evokes strong associations: movement, change, sharpness, dynamism. These words opened so many interpretations to us”, said Krzysztof Noworyta from Fish Ladder. “Our creation is a dynamic form – partially organic and technological – presenting a combination of veins, threads or digital connections. It seems to be an organism, captured in the moment, which will change its form in a second.”

“The starting point in the design process was the ‘C’ from the Festival’s logotype”, explains Paweł Marcinkowski of Platige. “I multiplied its shape numerous times, which in turn created a dynamic visual structure, referring to the traces left by the pen on a clean sheet of paper. This form accurately defined both the subject and the nature of the Conrad Festival – a constant and dynamic exchange of ideas, meetings and dynamism of experiencing literature together”.

The Conrad Festival is a joint initiative of the City of Krakow, the Krakow Festival Office and the Tygodnik Powszechny Foundation.

This year’s edition will start on the 24th of October and will run until the 30th of October.

The project was financed from the funds of the Ministry of Culture and National Heritage.

Create the Conrad Festival with us! 24 August 2017