Żanna Słoniowska, the author of a debut novel "House With Stained Glass" (published by Znak Literanova), was announced the winner of the Conrad Award for the best literary début of 2015. The winning book was chosen by internet users, who voted for the five nominee débuts until midnight on October 29

The official presentation of statuettes was held on 30 October at the award gala in the Congress Centre ICE Krakow. In addition to the statuette, the winner received a cash prize of 30,000 złoty, a monthly residential stay in Krakow and a promotion campaign of the book during next year's Conrad Festival and on the pages of "Tygodnik Powszechny" magazine. The Sunday's gala ended the 8. Conrad Festival.

"On my way to the Conrad awards ceremony, at the Congress Centre ICE Krakow, I met the winner of last year's edition, Liliana Hermetz. She told me how important the award was for her and how much it had changed her life," said Andrzej Kulig, deputy mayor of Krakow for social policy, culture and city promotion. "This proves that the activities initiated in Krakow, the UNESCO City of Literature, result with actual growth of media and literary critics' interest, and thus the general public, in the débutants," adds Kulig.

Born in 1978, Słoniowska is a journalist, translator and writer, and a Ukrainian with Polish roots. She has been living in Krakow for years. Słoniowska is an expert in history of Lviv and the author of the album "The most beautiful photographs of pre-war Lviv" (2013). Żanna Słoniowska is the laureate of the 2014 competition for best novel, organized by the publishing house "Znak". Her "House With Stained Glass" was awarded with publication. The writer was also nominated for the Literary Prize "Nike" in 2016. 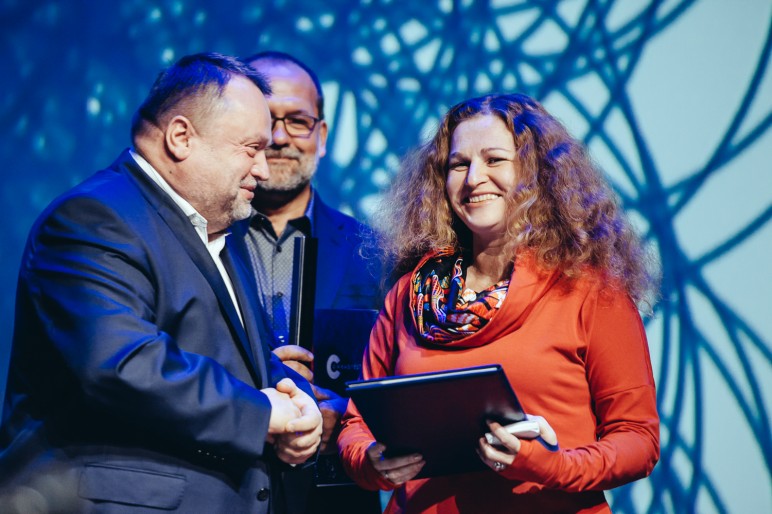 "Everyone is after security, but personally, writing this book was against the human basic need. For five years, it was a matter of faith. I was writing the text for which no one was waiting, I was writing in my native tongue, I gave up my work. But the worlds, which I have discovered in turn surpassed my wildest expectations," said Żanna Słoniowska on receiving the prize.

"The House With Stained Glass" is a story about the relationship between a young woman and mature man, about finding and defining one's own identity, against a backdrop of bulging balconies and scaly façades of Lviv's tenements. It is a four-generation family saga, in which the stories of the Polish and Ukrainian history intertwine at the level of personal choices, the fates of each of the characters. "I'm Lvovian" declares Nicholas, the only male figure in the clan of women, each of whom experienced life in a different era.

The five nominees will receive promotional support both during next year's Conrad Festival, as well as in "Tygodnik Powszechny".

The patron of the award is Joseph Conrad, one of the greatest modern writers, who began his international literary career after leaving Krakow. The founder and organizer of the awards is the City of Krakow, and the partners are: Instytut Książki, the Foundation of Tygodnik Powszechny and the Krakow Festival Office. The award is to support not only aspiring writers, but also publishers, encouraging them to take the publishing risk. At the same time, establishing the Conrad Award allows Krakow to realize key objectives included in the strategy for the UNESCO City of Literature.

The founder of the award is the City of Krakow, and the partners are: Instytut Książki, Krakow Festival Office and the Foundation of Tygodnik Powszechny.

For the first time in the festival's history, two awards were granted, to acknowledge people working in the publishing industry. The accolades went to: the best moderator of a festival meeting, Piotr Sommer and the best interpreter, Anna Butrym. The award was founded by the Honorary Consul of the Grand Duchy of Luxembourg, Tomasz Kopoczyński. The patron of the award for the best interpreter is the Ambassador of the Grand Duchy of Luxembourg in Poland, His Excellency Conrad Bruch. The winners were chosen by the festival audience, who could express their appreciation to the moderator and interpreter, the people involved in creating the Festival's atmosphere in a special way by voting in the festival centre after each meeting.

The Festival is supported by EDF Poland – the patron of the KBF, Volvo Wadowscy, PZU SA and the John Paul II International Airport Krakow Balice Ltd.

Create the Conrad Festival with us! 24 August 2017