The 3rd of December 2017 is the 160th anniversary of the birth of Joseph Conrad, the world’s most famous Polish novelist who wrote in English. On this occasion, the daily Gazeta Wyborcza has prepared a special issue of the holiday magazine, one entirely devoted to Conrad. The issue has been made in cooperation with the Krakow Festival Office. In this way, the editors not only want to remind readers of the writer’s unusual biography and his most important novels, but they also would like to show that Conrad remains an exciting artist, who can tell the story of the contemporary world as no one else. 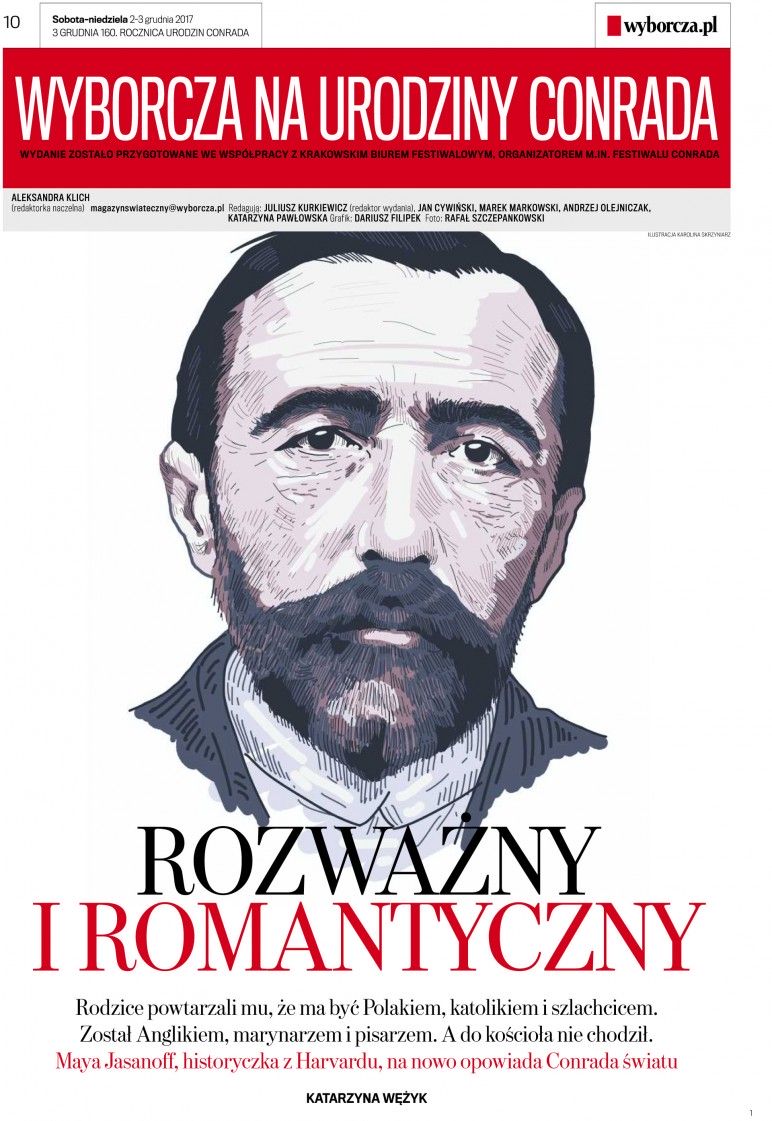 “Our journalists and co-workers have travelled half the world, from Berdyczów to London, in order to check where Conrad came from and where he could lead us today. The most eminent writers have told about their fascination with Conrad, and sometimes about how difficult it is to actually love him. Young authors have discovered in Conrad an excellent guide to the crazy world of today’s pop-culture. Artists have reinterpreted Conrad in writing and in drawing”, says the editor of the special anniversary issue of Gazeta, Juliusz Kurkiewicz.

“It is very rare for a daily newspaper to be devoted to the person and work of one writer only”,saysIzabela Helbin, the Director of the Krakow Festival Office, which cooperates with the daily Gazeta Wyborcza at issuing this very exceptional "Magazyn Świąteczny”.  “We have been travelling in the footsteps of Conrad since the beginning of the year but the culmination has been planned for the birthday weekend. Apart from reading the special issue of the daily, we will have the opportunity to hear the premiere of a radio drama based on the novel titled “Heart of Darkness”, to watch the unveiling of the mural dedicated to Conrad, to take part in the scholarly conference “Conrad and Pop-texts”, to walk in literary footsteps of the writer and to visit the outdoor exhibition connected with his work.

In the special birthday issue titled “Gazeta na urodziny Conrada”, readers are going to find e.g. an introduction on Conrad written by Adam Michnik and Olga Tokarczuk, Katarzyna Bielas’ interview with Zdzisław Najder, a world-famous authority on Joseph Conrad’s works, in which the scholar says why he has stopped loving Conrad, as well as a paper by Katarzyna Wężyk about Maya Jasanoff, a Harvard professor who has set on a voyage tracing Conrad through the contemporary globalized world. The issue includes also a cartoon by Marek Sieńczyk, interesting biographical facts about Conrad elaborated by Małgorzata Niemczyńska, a new canon of Conrad’s books prepared by Prof Ryszard Koziołek and an article by Marcin Wicha on gadgets for readers or why Conrad has appeared on socks.

Throughout the whole issue of Gazeta there are also quotations from Joseph Conrad’s books relating to various spheres of life.

The year 2017 was announced Conrad Year to commemorate the 160th anniversary of the writer’s birth. Conrad is the author of such novels as Heart of Darkness, Lord Jim, The Shadow-Line or The Secret Agent.