Meetings with authors, poems reading, discussions and debates – on 7-10 June Krakow, for the seventh time, will become the world capital of poetry.

“A year of the hunter is the motto of the upcoming Miłosz Festival edition in Krakow. A Year of the Hunter by Czesław Miłosz is a unique diary presenting one year of a mature poet’s life and providing a model of world perception that is topical today. We experience a radically fragmentary reality. The world seems perceptible only for a fleeting moment of the present, amid a growing sense of threat we feel. We strive to build our identity in close contact with reality that keeps slipping away from us. In fact we do not know if reality is a projection of our fears and imagination or if it contains a solid core of sense that we can discover through literature” – says Krzysztof Siwczyk, artistic director of the festival.

Painting portraits of his opponents (but also his fellows) in A Year of the Hunter, Czesław Miłosz presents a polyphony of clashing ideas and literary aesthetics. In so doing, he does not forgo voicing his sometimes staunch and controversial views. A fluctuating amplitude of dispute concerning literature, ethics, social matters, stance on one’s homeland, habitable zone or metaphysics enables us to recognise the character of times we live in. The language of the dispute is at stake.

“Poetry is a starting point for discussion because it opens our eyes and sharpens our attention to the various ways of describing the world we happen to share. Poetry can also become the ending point, providing a unique chance for us to reach agreement or at least find a common ground among this multitude of languages, systems of values and beliefs” – says Olga Brzezińska, president of the City of Literature Foundation and programme director of the festival organised together with the Krakow Festival Office.

In every act of reading or writing we hunt the world that invariably slips away. Every day we experience the dread of role-shifting in this hunt. Sometimes we are game, when ideological input reduces the complex picture of reality to simple, existential recipes, depriving us of the right to complexity in our attitudes and choices. We become hunters when we try to implant our world perception in others, disregarding dialogue and respect for the otherness of somebody’s language and values expressed in that language. There is one thing that unites us: we all play a game of fickle rules, in which the stake is either co-existence amid differences or a blind violence of institutionally declared truths. 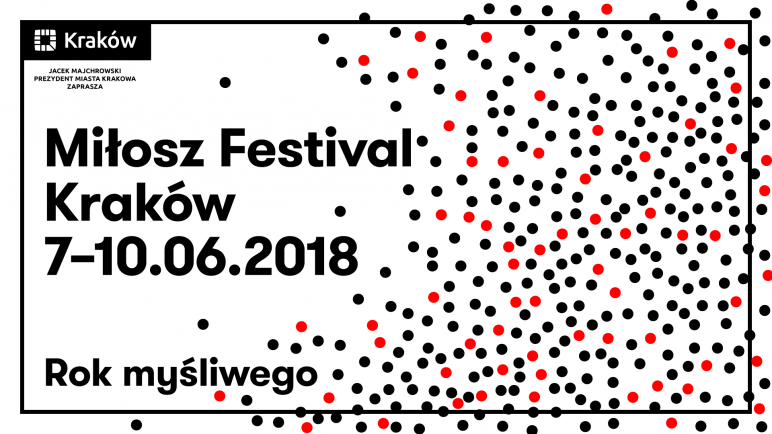 “The Miłosz Festival is a meeting of various poetic privacies and outstanding literary individualities” says Izabela Helbin, director of the Krakow Festival Office, “Crowds of readers come to Krakow to meet highly esteemed writers. It will be likewise this year, and the presence of authors from numerous countries will make Krakow a place where poetry is discussed in various languages.”

Eminent poets will be visiting Krakow, representing six languages and as many different visions of literature. Guests from abroad will include: Jane Hirshfield and Ron Padgett from the USA, Eugenijus Ališanka from Lithuania, Katja Gorečan from Slovenia, Maria Stepanova  from Russia and Olvido García Valdés from Spain. Their multi-voice narrative will be enhanced by Polish poets: Marek Baczewski, Marcin Baran, Tomasz Bąk, Jerzy Jarniewicz, Marzanna Bogumiła Kielar, Urszula Kozioł, Joanna Oparek, Andrzej Szuba and Ilona Witkowska. We hope that, as every year, the Miłosz Festival will become a splendid celebration of poetry covering different traditions, a time for meeting and conversation about literature, ideas and the world. We also believe it will be a time of multi-voice narrative rather than a rhetoric of exclusion and political stigmatisation.

MEET THE GUESTS OF THE MIŁOSZ FESTIVAL 2018

The course of the festival will also be set by remarkable graphics, in which ubiquitous red and black dots refer to the rhythm of days throughout the year. The author of this concept, Tomek Budzyń, explains: “There are 365 dots like days in a calendar, some overlap, some elongate and others seem to elude our understanding of order. Their strong colours refer to conflicting world views but also remain in a constant dialogue.”

Organisers of the festival are: the City of Krakow, Krakow Festival Office and the City of Literature Foundation.

More information on the festival and the upcoming events soon to be found at: www.miloszfestival.pl

Co-financed by the Minister of Culture and National Heritage