4 November 2011 Second day of the Conrad Festival behind us

English as an opportunity or threat to literature, the role of individualism in the short story form, the novel as a challenge to writers, other photography in photography – these are only some of the themes touched upon during the 2nd day of the Conrad Festival.

The evening discussion, entitled Global Literature: Chances and Risks, attended by representatives of the organisers of literary life from Poland (Grzegorz Gauden, Director of the Book Institute), Scotland (Nick Barley, Director of the Edinburgh International Book Festival) and India (Namita Gokhale, Director of the Jaipur Literature Festival), touched upon the essence of its own topic, and also allowed participants to share individual points of view. 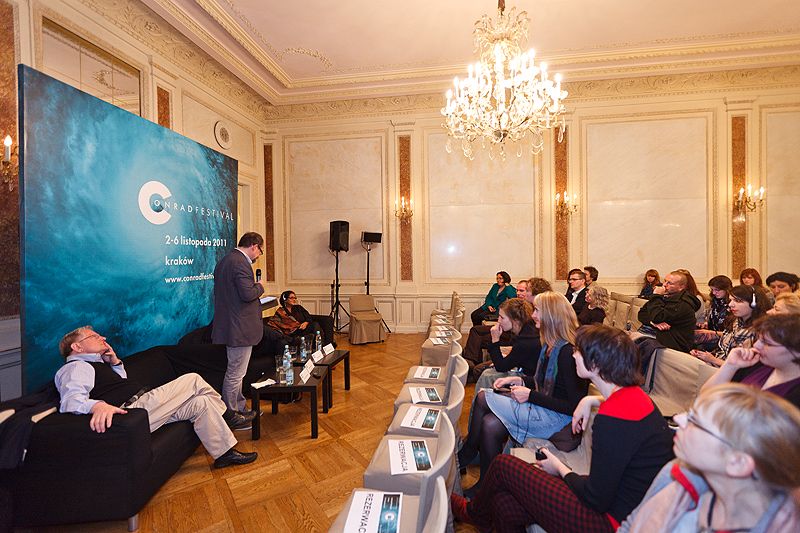 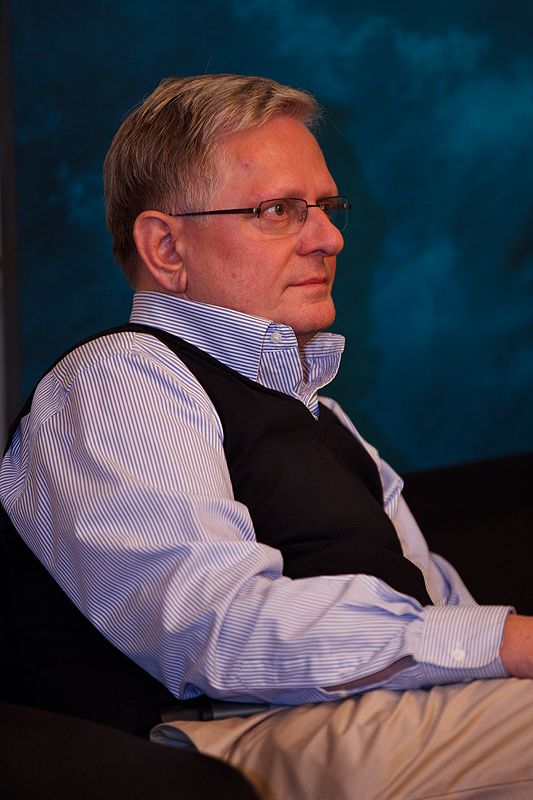 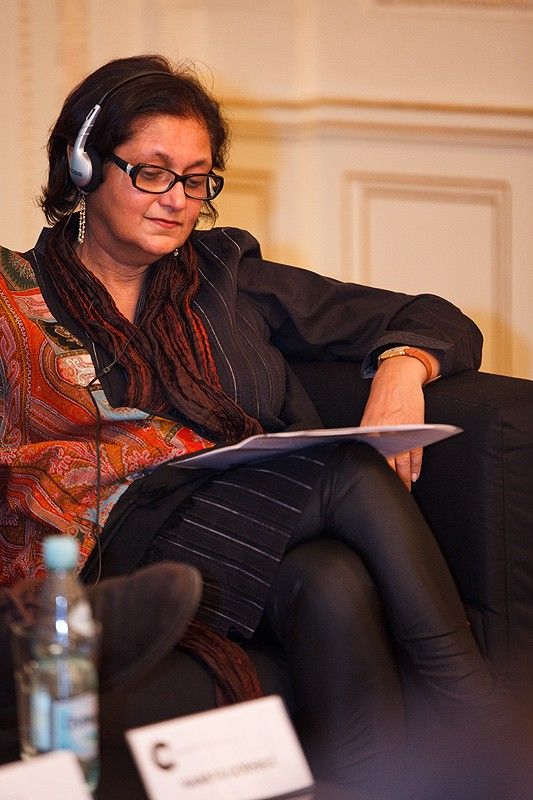 The discussion began with basic enumeration encouraging reflection on the role and domination of the English language. “We invited authors from over 50 countries. Last year, we hosted about 750 writers,” revealed Barley, adding “At least a half of our guests spoke in a language other than English. The event also featured representatives of Polish literature and critics such as: Michał Paweł Markowski and Adam Michnik, who gathered about 150 people at his meeting. Both discussions were devoted to Czesław Miłosz.”

The issue of English language and its dominating role was also present in Gokhale’s statements, who drew our attention to the changing proportions in this regard. “We observe the end of the domination of the English language. The Jaipur Festival contrasts myths, languages and highlights the diversity.”
Gokhale stressed the unusual situation of India, a country with over 20 official languages. “English is only one of many and it is not a problem. Today, I can’t imagine not speaking at least two or three languages,” she continued, referring to a remark by the host of the discussion, Prof. Michał Paweł Markowski about English as a language “that strips us of individualism.” “We must publish in English to be known in the world,” he had also said.

Gauden for a while shifted the attention from the English language and its role, a prevailing topic of the discussion, by the stressing the significance of neighbours’ languages. “Translations into German and Russian are of enormous importance to Polish literature. It is important to us, too. Therefore, as the Book Institute we seek to promote translations into those languages.”

The many issues touched upon during the evening discussion also included the issue of local identity. “How to get rid of the demon of nationality and yet promote national literature?” Markowski provoked the guests. Gokhale tried to solve the problem formulated in the question by discussing the example of Sindhi, an official language both in India and Pakistan.

The power of social constructs about globalisation processes – Zygmunt Bauman resounded in the background – was subverted by Barley, who stated that writers-people do not confirm the theories. He referred to the afternoon meeting with David Grossman, an Israeli writer, columnist and one of the most popular authors of literature for children. On Wednesday, we had an opportunity to see and listen to him during a performance of Itamar Meets Rabbit, and yesterday he spoke about writing and creating short stories. 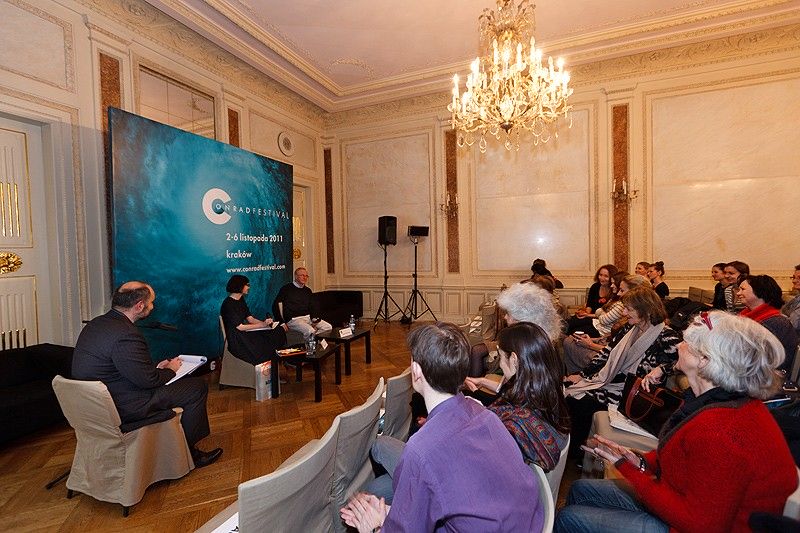 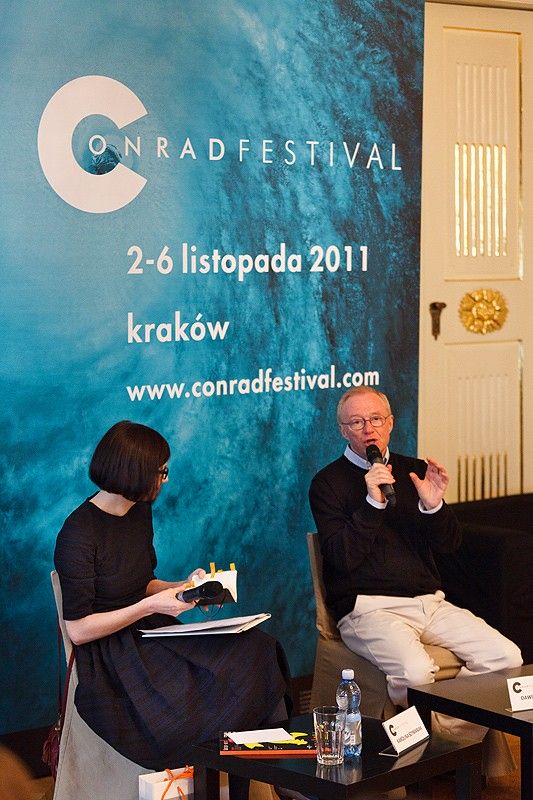 Karolina Szymaniak, a truly sensitive and intelligent reader of the Israeli writer, argued in the festival catalogue that “Grossman has on many occasions expressed a belief in the saving power of the novel. Sometimes this belief seems naive, boyish and irritating. This desire of an all-encompassing narrative, the desire of “second creation” led him astray. On the other hand, Grossman’s “beautiful stories” are shattered narratives – painful, frenzied, at times obsessive even.”

Literature may have various faces, which – let us refer again to the evening discussion – we were reminded of by Gokhale, who said that many books in India are subsidised, and some titles, e.g. on diets, support other kinds of literature. “At the festival I will host a panel devoted to books on diets. It’s an important theme,” said Gokhale, stressing the role of marginalised genres.

The genres making up the focal point of the Conrad Festival, though, include not how-to literature but novels. “Prose is an instrument of globalisation, unlike poetry, which has resisted assimilation and opposed globalisation,” stated Prof. Markowski from the historian’s point of view.

We could also learn about opportunities carried by the novel in local culture, during a discussion attended by young Polish prose writers. The achievements of Agnieszka Drotkiewicz, Marta Dzido, Jerzy Franczak and Ignacy Karpowicz make us curious to follow the development of Polish prose. 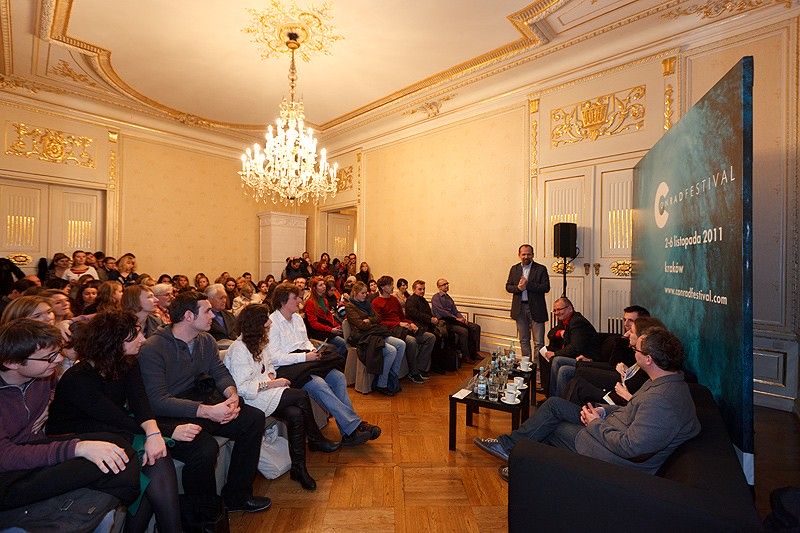 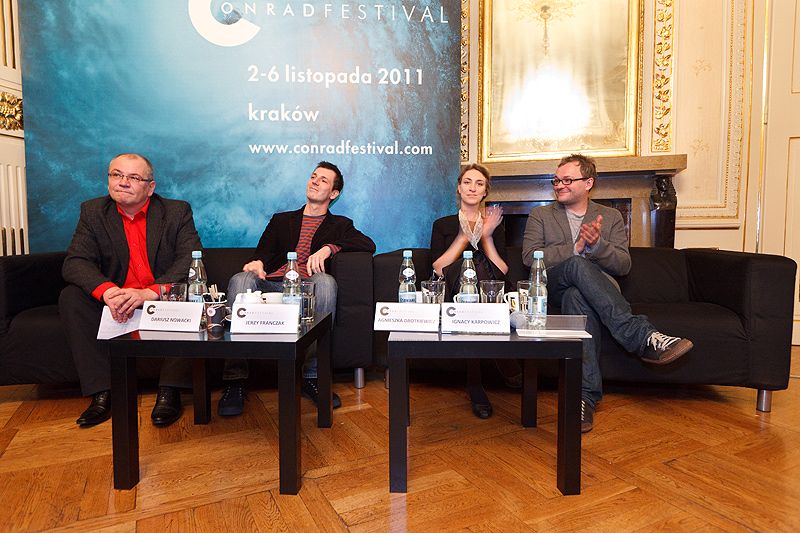 The Conrad Festival comprises not only discussions about literature but also performances and lectures. Just yesterday, the festival audience saw Coprophags or the Hated, but Indispensable; Jan Klata’s performance staged t the Teatr Stary; some of the Quay Brothers’ films, and a concert of Tomasz Budzyński and Friends, preceded by a meeting hosted by Andrzej Stasiuk. 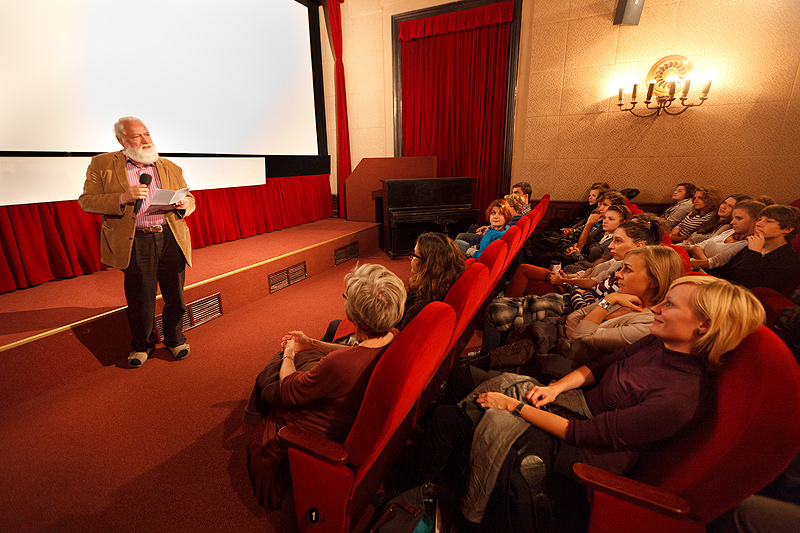 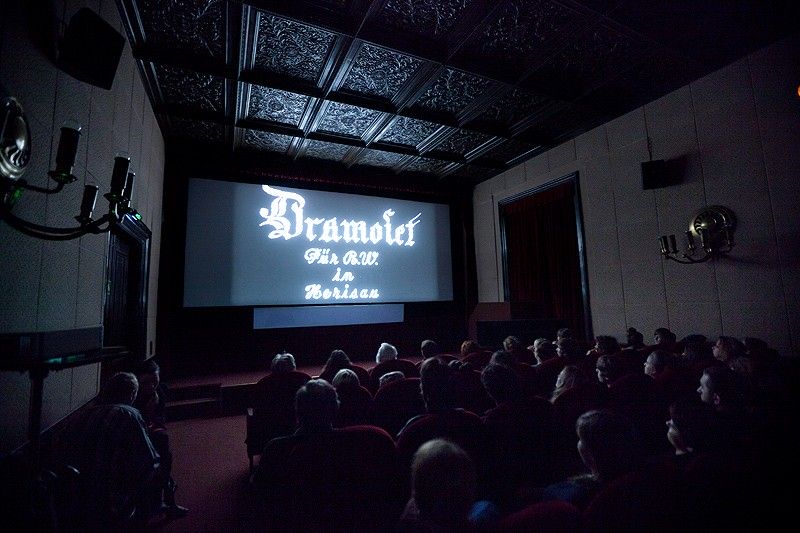 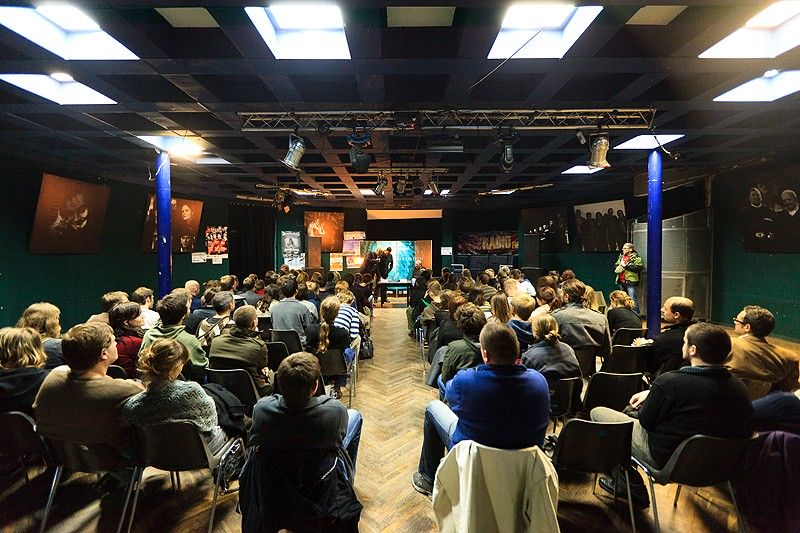 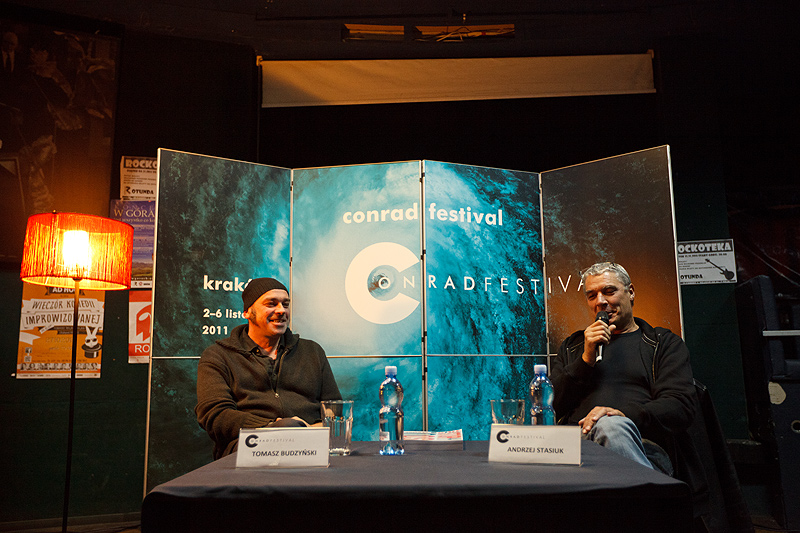 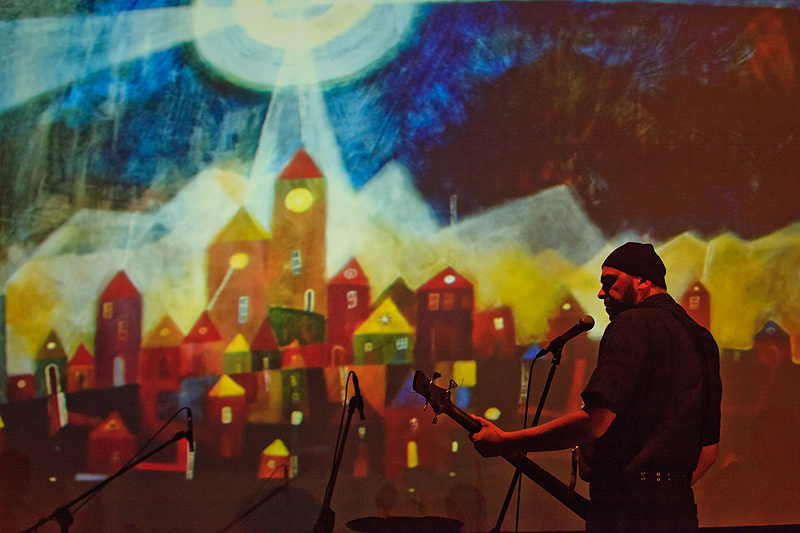 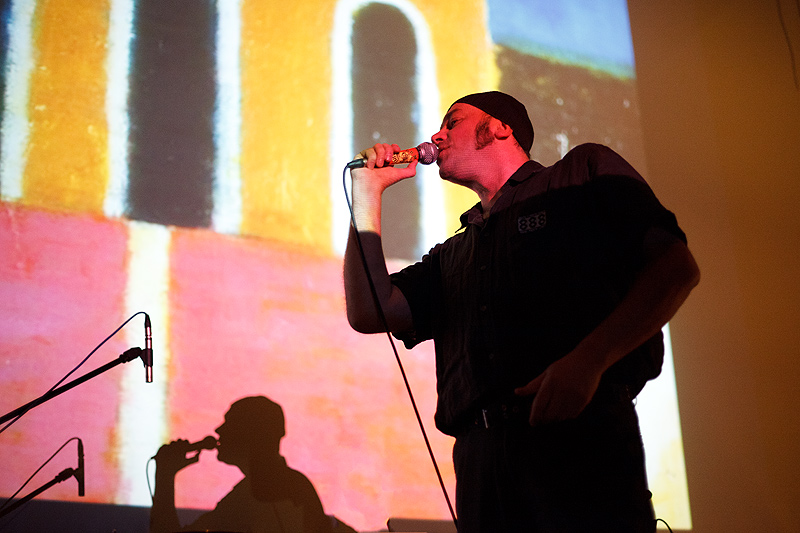 The lecture that attracted audiences in greatest numbers was the one from Andre Rouille, a historian of photography, who, during – as he put it himself – his first visit to Poland, wished to discuss the arguments contained in the book La Photographie: Entre Document et Art Contemporain (Polish edition published in 2007). The analyst and theoretician of photography talked about differences between digital and silver nitrate-based photography, introducing the audience to the context of technological changes and contemporary aesthetics discourse or – to put it in stricter terms – broadly meant issues of capturing and preservation. 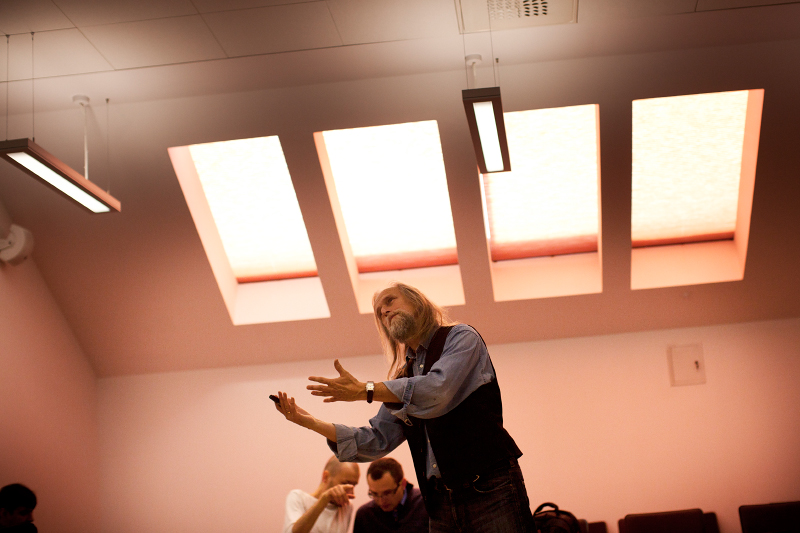 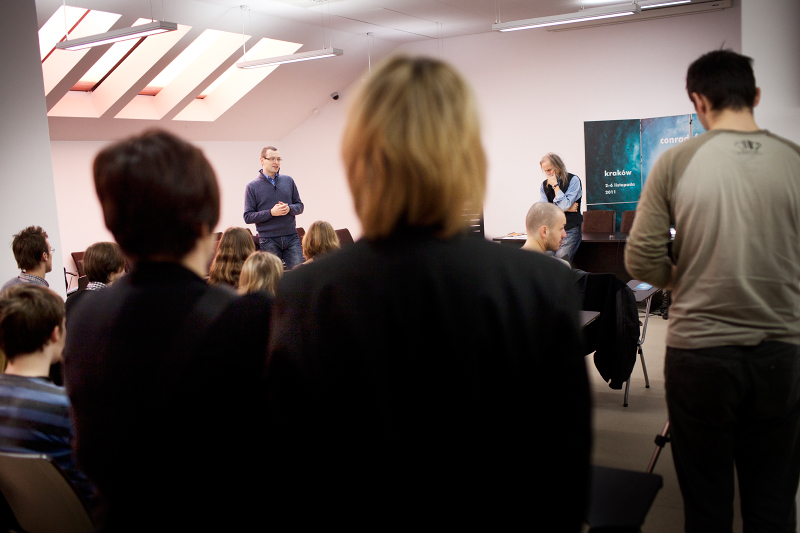 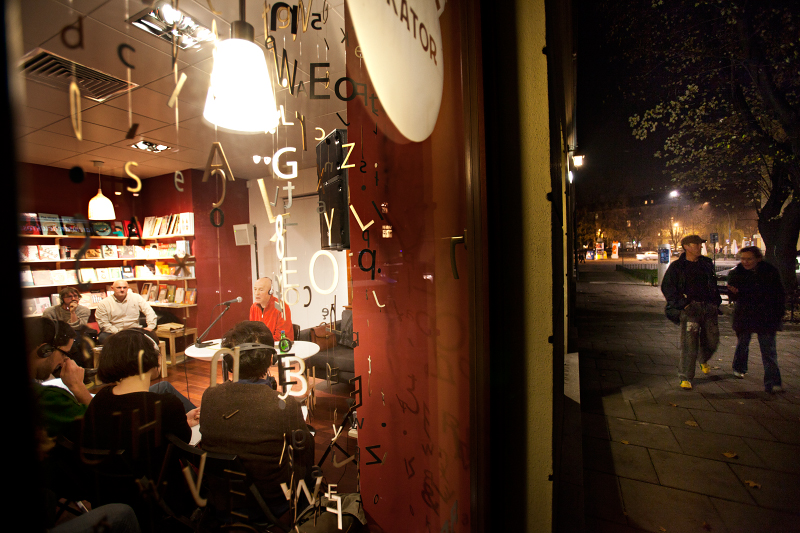 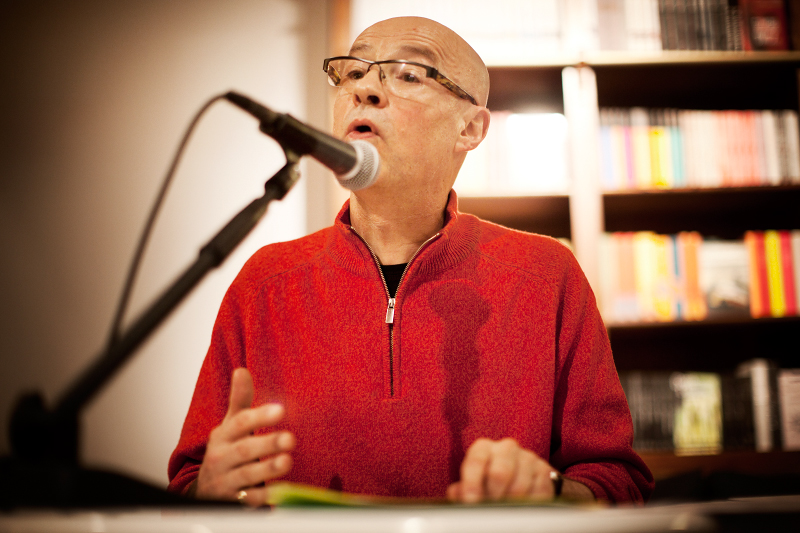 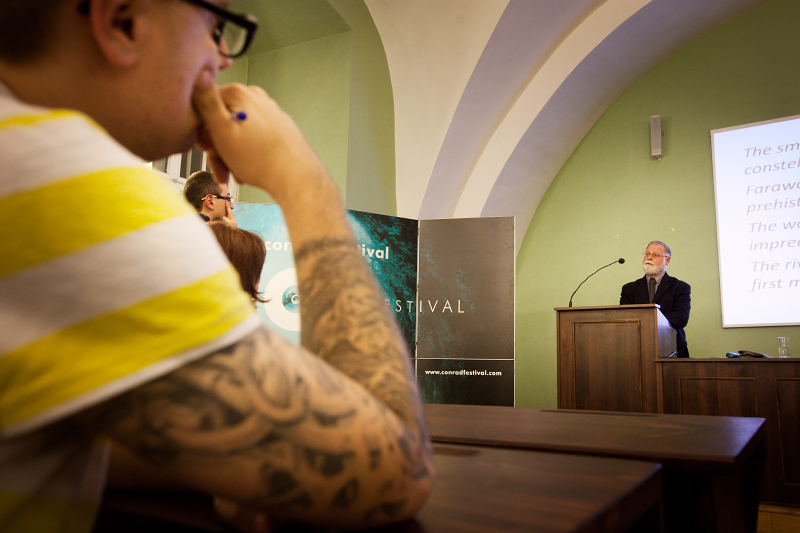 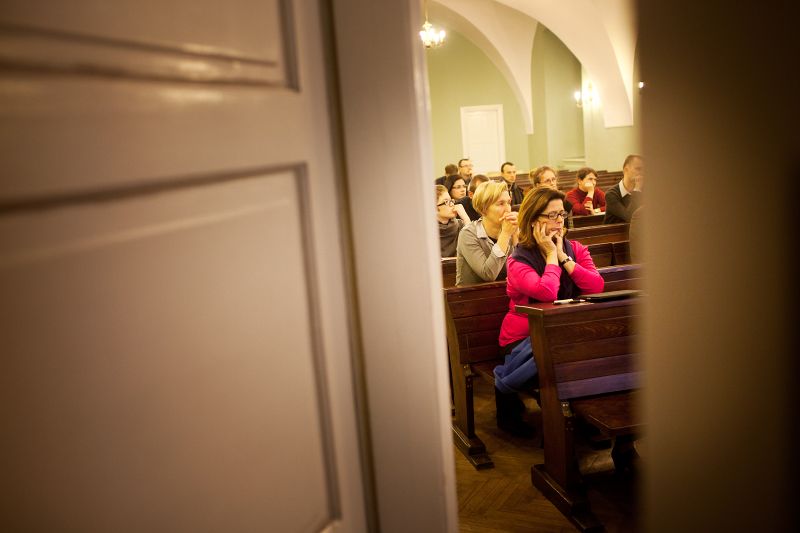 Pictures: Grzegorz Ziemiański, www.fotohuta.pl
And talking of preservation, it is worth stressing that today’s events were held under the Preserved banner. From amongst the events planned at the Festival Centre at the Pałac Pod Baranami, we recommend, among others, a meeting with Maria Amelie, An Illegal Norwegian, who had stayed in Krakow as part of aid for writers in exile (at 3 pm), and the discussion Women Under Pressure with Fleur Jaeggy, Namity Gokhale and Zeruyi Shalev (at 4 pm). It was also worth attending the meetings with Alberto Manguel (at 6 pm) and Steve Sem-Sandberg (at 8 pm).

At 10 pm, the Pałac Pod Baranami was also supposed to host a meeting with Michel Houellebecq. The famous and controversial French writer, author of the much talked-about Elementary Particles, and the The Map and the Territory, recently published in Poland, was supposed to meet Cezary Michalski in the field of struggle. We already know that the French author will not come. Yesterday, Houellebecq did not appear at the airport. Did he resign from the journey? Or maybe he set out on a journey somewhere else?