5 November 2011 Halfway through the Festival

Meetings with the Illegal Norwegian and three unusual writers (Gokhale, Jaeggy, Shalev) and the stories told by Manguel and Sem-Sandberg generated various questions. What is the individual experience in the context of the language of the majority? How to distinguish care from empathy? Where do these details lead us? Those were the issues discussed at the 3rd Conrad Festival yesterday.

The Illegal Norwegian, Maria Amelie, could not stay in Norway any longer and was deported. Normal life, a familiar space, friends – all of that was left behind in the north. Against her will, Maria Amelie moved south, to Krakow. But this city offered her protection. She lived here for several months, and the new experiences might result in a new story. The Illegal Norwegian, a book by Maria Amelie, not only became a bestseller in Norway, but also sparked a discussion on the quality of state and society. It also destroyed the belief about sterile identity, showing, by particular example, how futile social dreams can be: Maria Amelie’s real name is Madina, she comes from North Ossetia and she lived in Norway illegally for eight years. Finally, The Illegal Norwegian is a story that could happen anywhere and to anybody, as we could see yesterday, during the meeting with Maria Amelie herself.

The language of an individual in the context of the language of culture was also the subject of the afternoon meeting with three unusual writers: Zeruya Shalev (Isreal), Fleur Jaeggy (Switzerland) and Namita Gokhale (India). The host, Beata Stasińska, widely commented on and quoted the texts of her guests, emphasising the situation of women in social roles. She also took up the issue of feminist writing, being particularly interested in whether ‘feminist reactions might actually be limiting’. 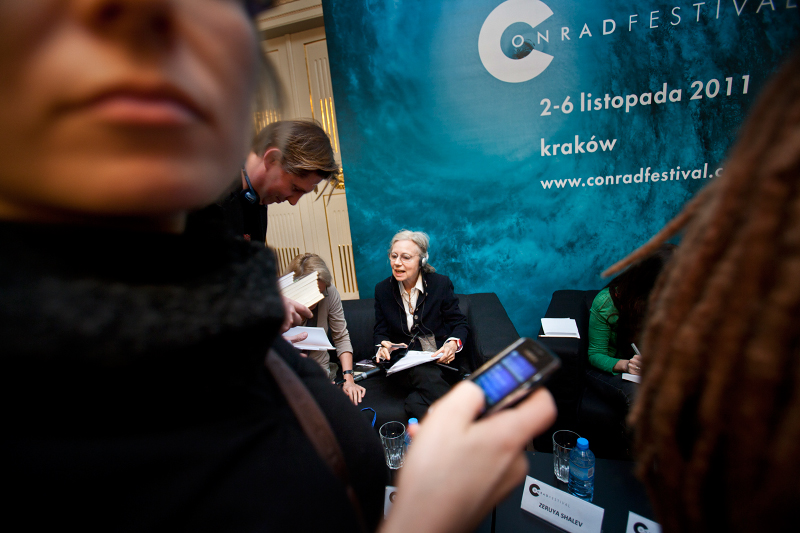 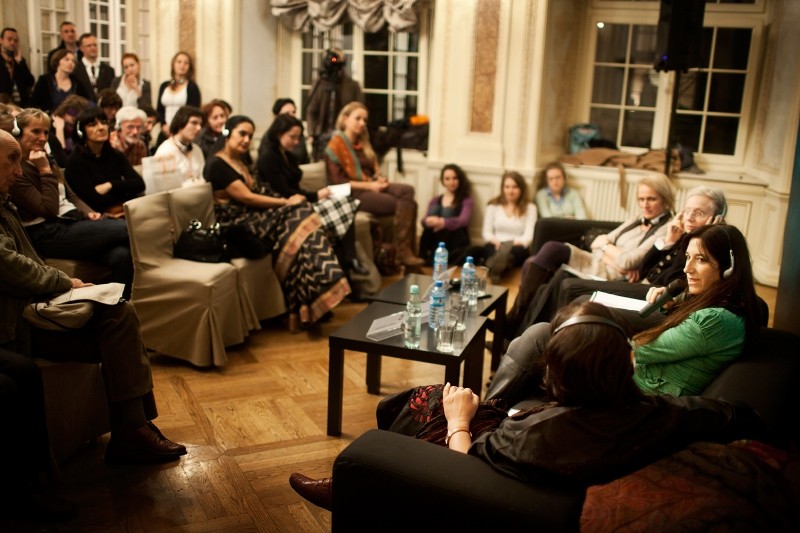 ‘I was 25 when I wrote my novel,’ Namita Gokhale said. ‘I did not realise that it could shock. It was an ordinary story of a middle-class woman looking for sex. But it turned out that such a woman cannot look for sex. My daughters had to hear at school that their mother is a pornographer.’ Answering Stasińska’s question, Gokhale said that she tries to write as a writer, not a woman, although this does not mean that female themes are not relevant.

‘As a writer, I have many different personalities,’ Zeruya Shalev confessed. ‘Most of my readers are women. Reading can help people change. Men start to understand their wives. Some even start to be afraid of them.’ Shalev said that in her novels, she tries to follow the stories of the protagonists. ‘I am interested in how they become more and more confident. But this literature is more complex than that – the idea is to show how complex my protagonists are.’ Shalev admitted that the feeling of guilt is an important motive in her works. ‘This is very Jewish, but also very Polish. The feeling of guilt brings us together,’ said the author of Late Family. ‘I always ask the readers to approach my books with empathy. I myself very much feel for my protagonists. Sometimes I even cry when writing. My son once noticed that and asked what’s wrong. I told him that I was writing a book, to which he said that if I am the one writing, I can make the characters happy. Indeed, I am a god to my protagonists, but they have to surpass themselves. This makes them better. This is what life is. I think that life is not about being happy, but about learning all the time.’

Reading is a permanent activity for the participants of the 3rd Conrad Festival. Not only metaphorically, either, as Reading Lessons take place every day. Early in the evening, Alberto Manguel explained the concept of an ideal reader. He spoke with passion, as he considers reading to be great fun. Manguel quickly found out that reading is a source of pleasure for him, as Grzegorz Jakimowicz, the host of the meeting, said. First, with the help of his nanny, and then by himself, he found out about various dimensions of this fantastic experience. Back then, he never thought that his life would be developing in the rhythm of reading, that reading would become the meaning of his life, the subject of his studies and many of his texts. He discovered this destiny as a teen, thanks to Jorge Luis Borges. 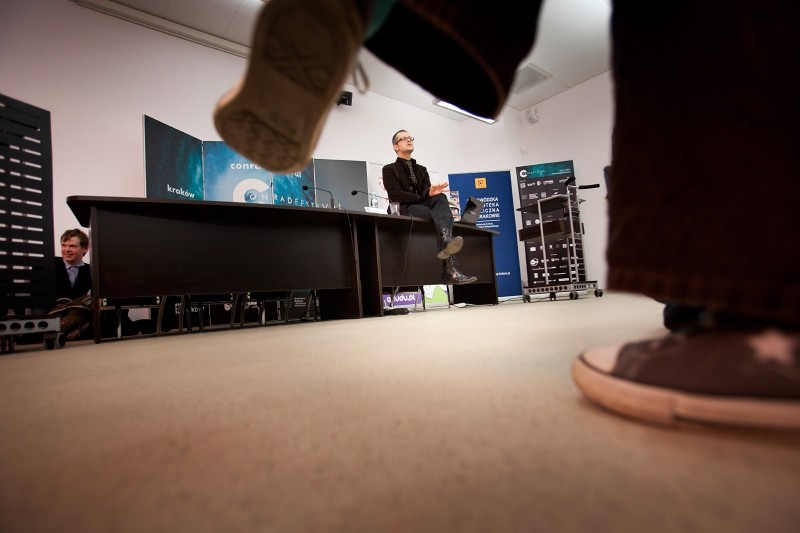 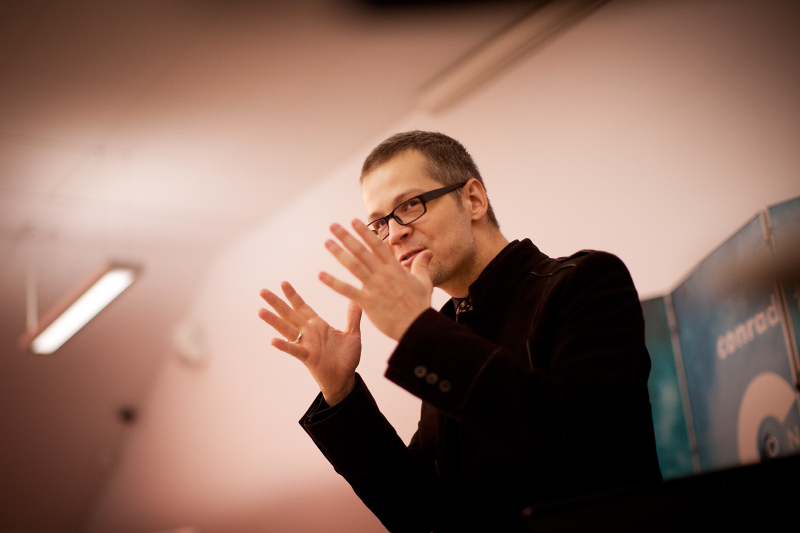 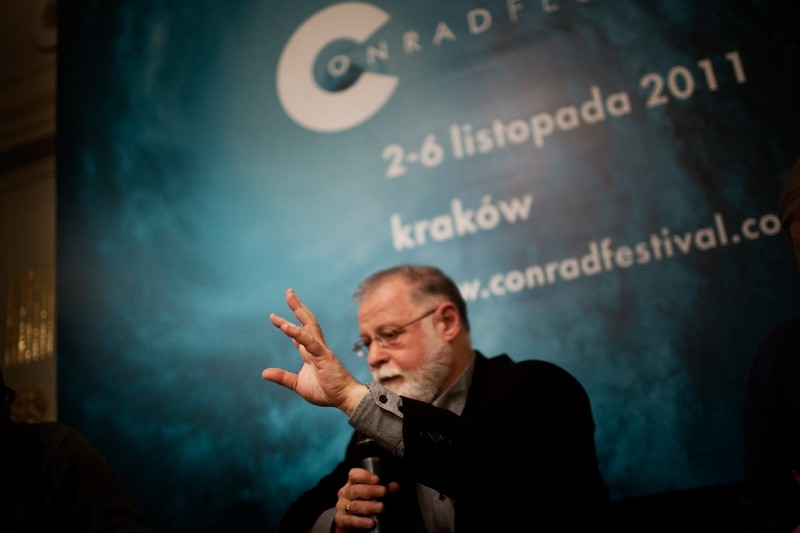 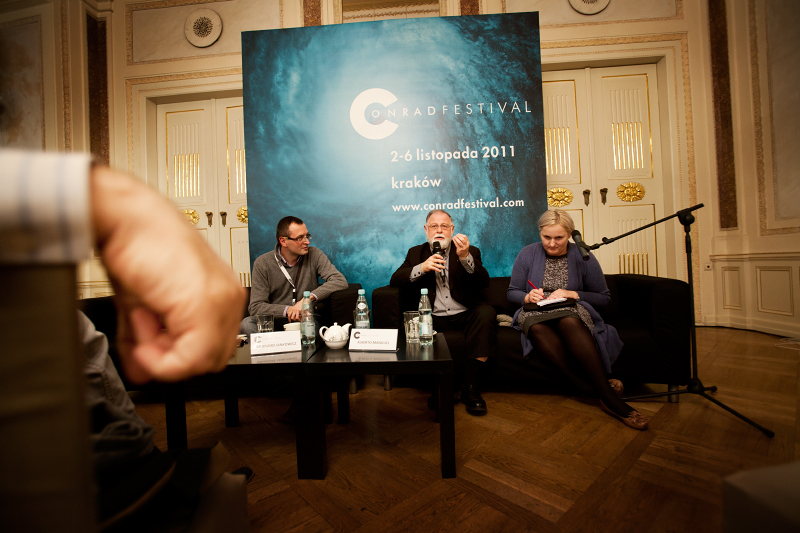 Speaking of destiny and discoveries, it is worth tracing them in the works of Steve Sem-Sandberg, a Swedish prose writer and critic, author of a trilogy on the lives of three women: Milena Jesenská, Ulrike Meinhof and Andreas Salome. Sem-Sandberg, who took part in the Fiction and Holocaust meeting, also wrote the Prague [No Exit] essay. Jan Balbierz writes of it that Sandberg is interested in various aspects of material culture: things bought at a junk shop, a collection of insects covered with a glass panel, rohliks and Moravian wine, or trams – vehicles so common in Central Europe, yet so exotic to a Scandinavian. In a former militia museum, next to forged passports and CIA reports, he finds a stuffed sheepdog used for hunting down escapees in border entanglements. Details, objects through which one can see history and through which experiences are transmitted? 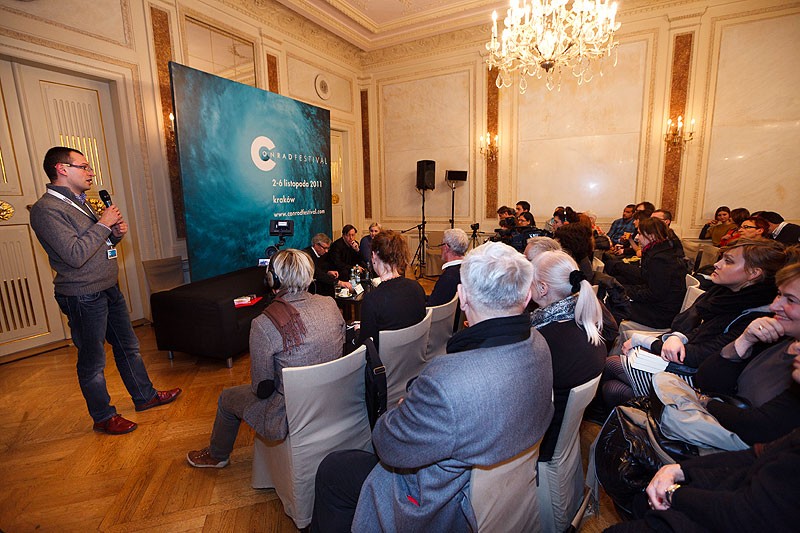 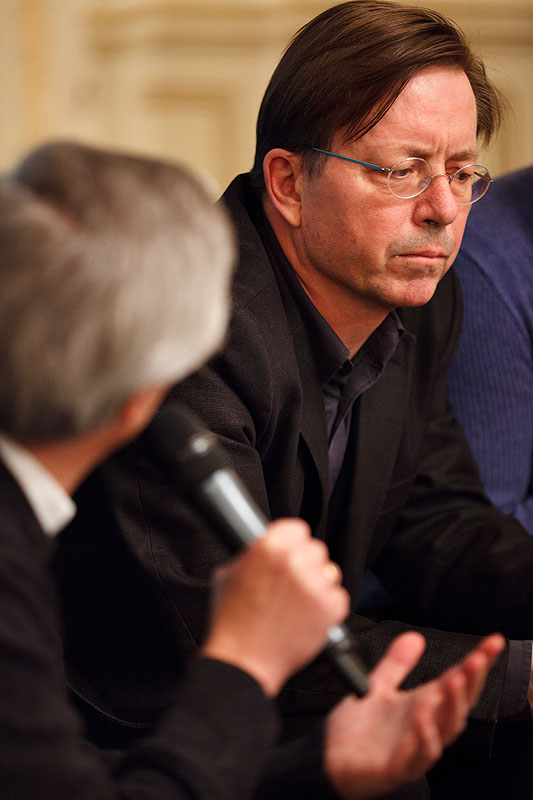 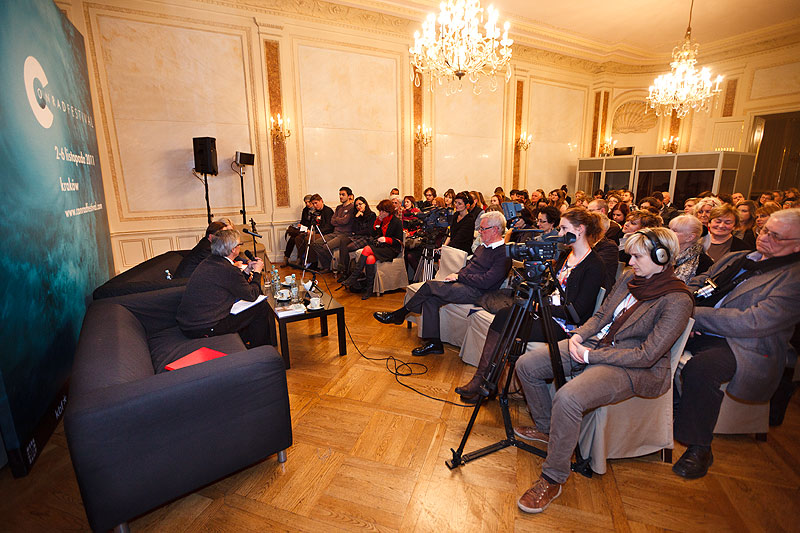 Literature is the centre of the 3rd Conrad Festival, but sometimes it is also an excuse for telling a wider story. Late in the afternoon, at the Galeria Jana Siuty on ul. Sławkowska, crowd gathered to see the installations of Naresh Kapuria. Namita Gokhale was also there. 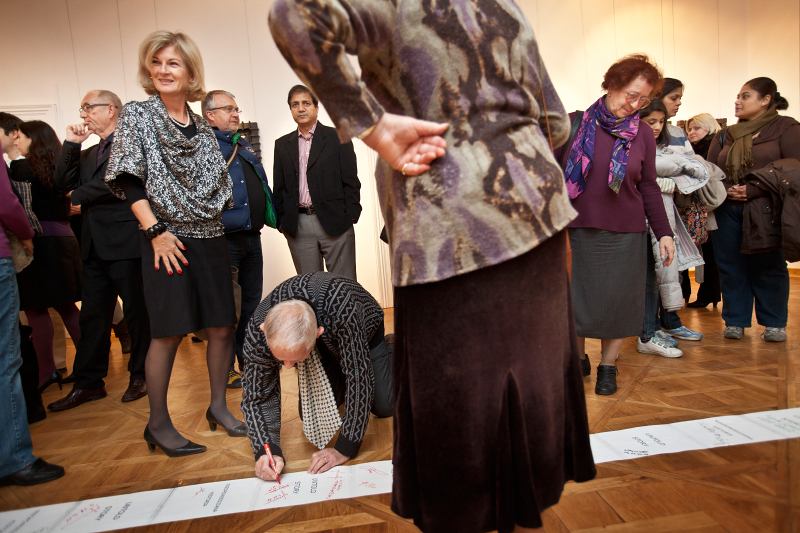 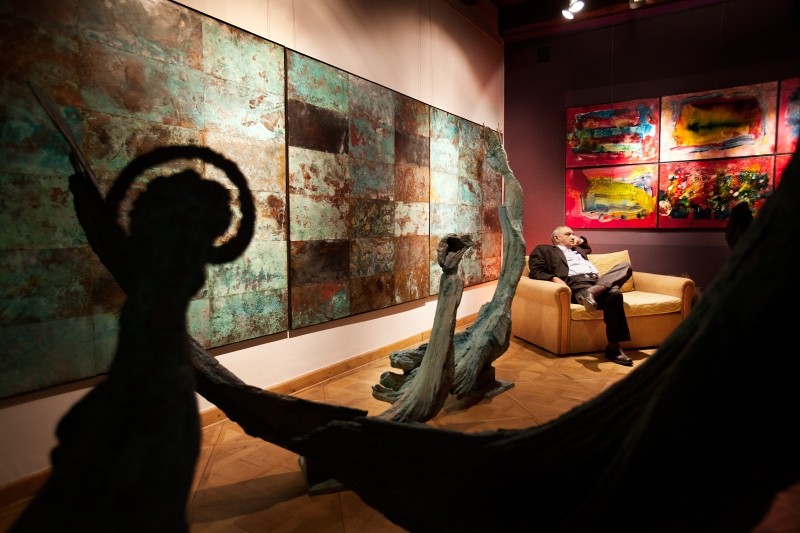 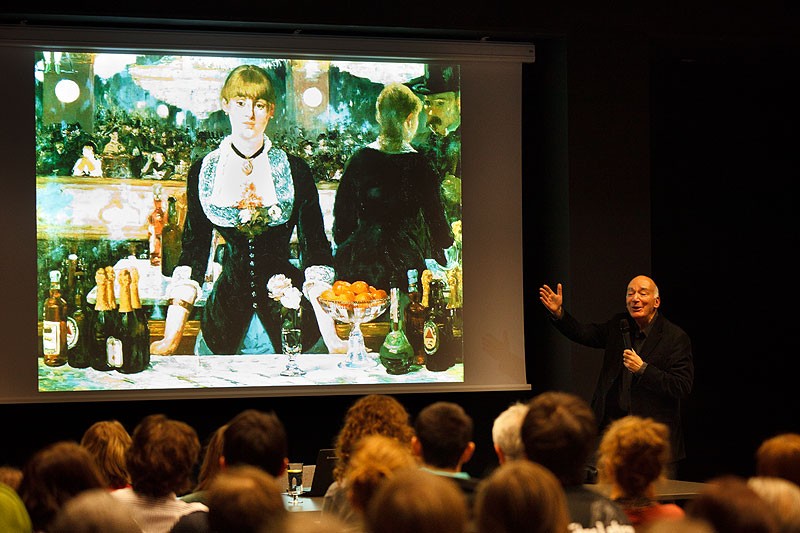 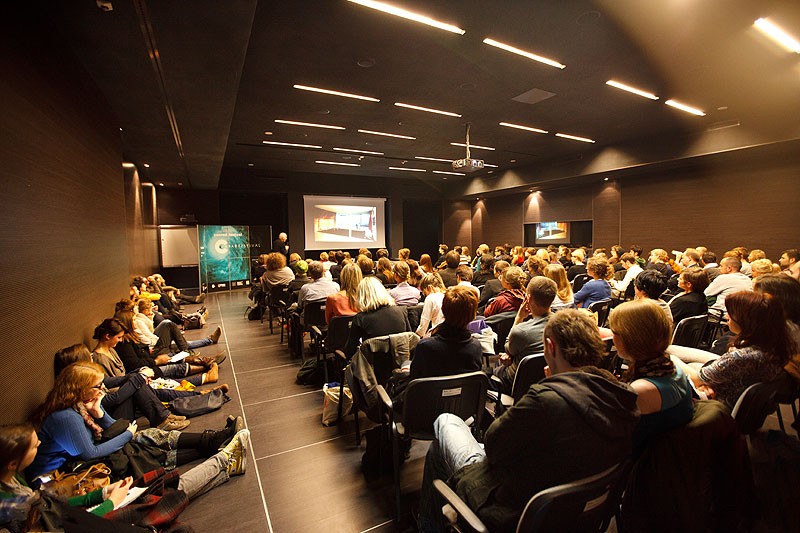 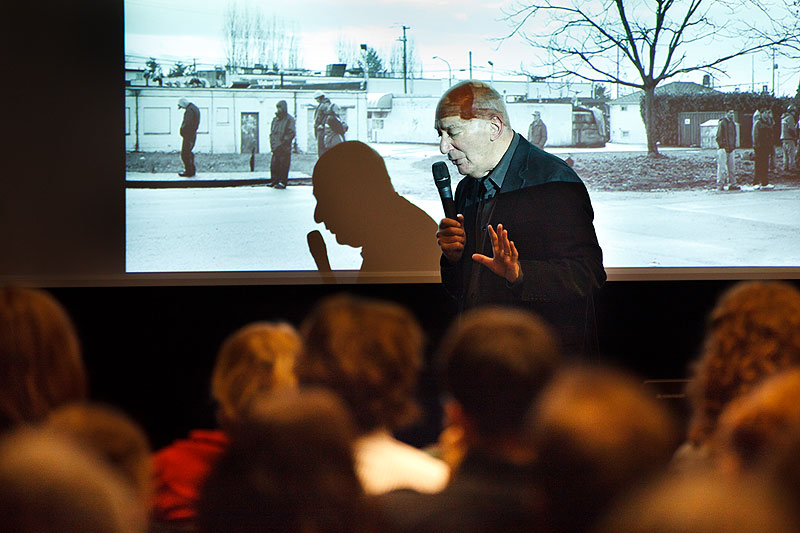 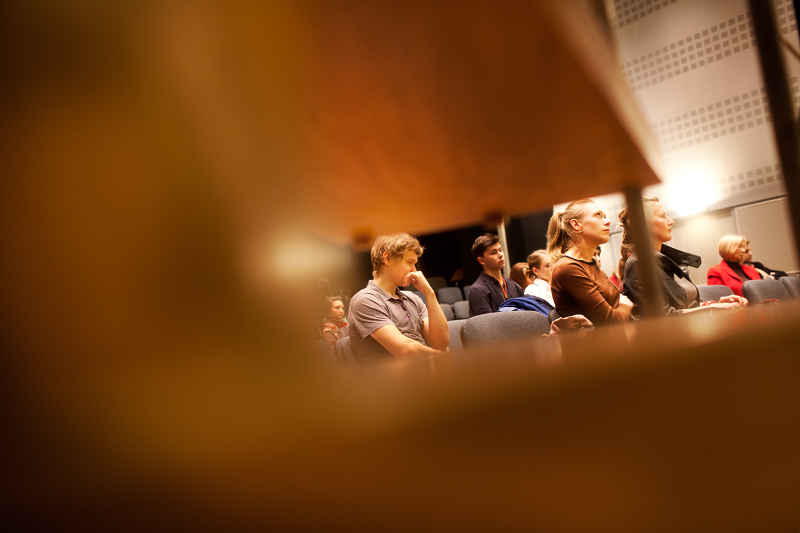 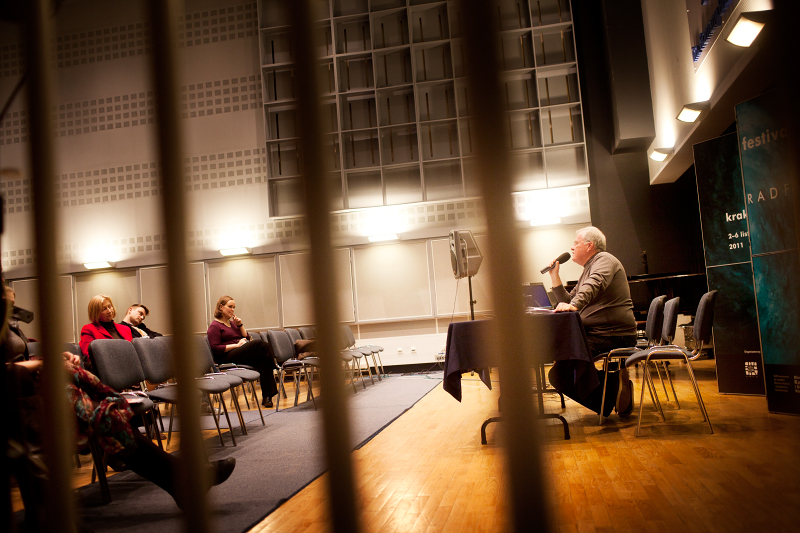 The next day of the 3rd Conrad Festival will be the day of the Transferred. At noon, at the Regional Public Library, a Reading Lesson on the Heart of Darkness will take place. Magda Heydel, author of the latest translation of this novel into Polish, will host the meeting. Just before noon, Poetic Tranformations will start at the Pałac pod Baranami. Participants include Francine Clavien and Marcin Kurek (11am), Vanni Bianconi and Joanna Wajs (noon), Jacek Dehnel, Armin Senser and Ryszard Wojnakowski (1pm). At 2 pm, in the J. Błoński Hall of the Jagiellonian University, Michael Fried will deliver his lecture, The Joseph Conrad Annual Lecture: Joseph Conrad’s The Secret Agent. A meeting with Janusz Rudnicki will be held at 3pm at the Pałac pod Baranami. At 4pm, at the same venue, the Translation and Politics discussion will be held with the participation of Andrei Khadanovic, Susan Bernofsky, Anders Bodegard and Adam Pomorski. In the late afternoon and evening, there are meetings with Eva Hoffman (Lost in Translation, 6pm, Pałac pod Baranami) and Roberto Calasso (Literature and Gods, 8pm, Pałac pod Baranami).

As you can see, the journey with Conrad is very much on.