6 November 2011 The concrete and the text

Respect for culture in translation, an exile from which one can always return, fabrication and life versus literature – these are some of the threads touched upon during the penultimate day of the 3rd Conrad Festival. And to say that the audience turned up in large numbers is really not enough...

The starting point for the afternoon discussion with the participation of Andrei Khadanovic, Susan Bernofsky, Anders Bodegard and Adam Pomorski was the dangerous, yet fascinating and appealing relationship between translation and politics. Magda Heydel, the host of the midday Reading Lesson on her translation of Conrad’s Heart of Darkness, also encouraged the audience to reflect on this issue. 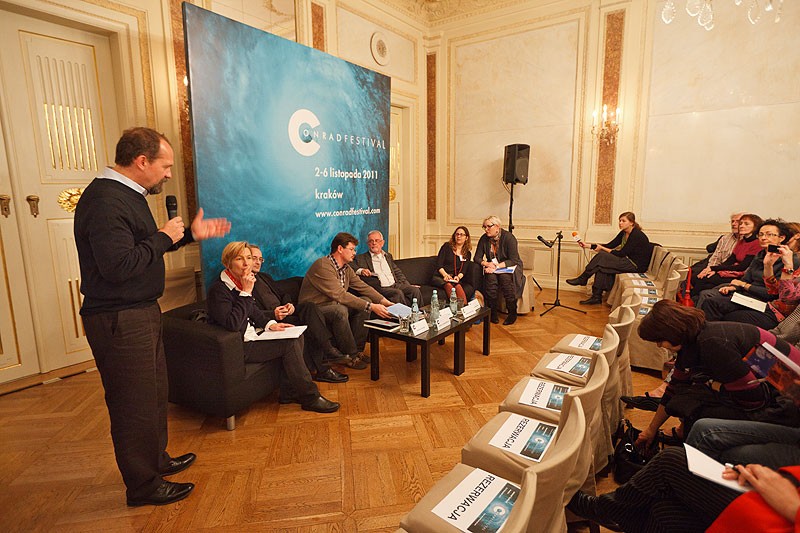 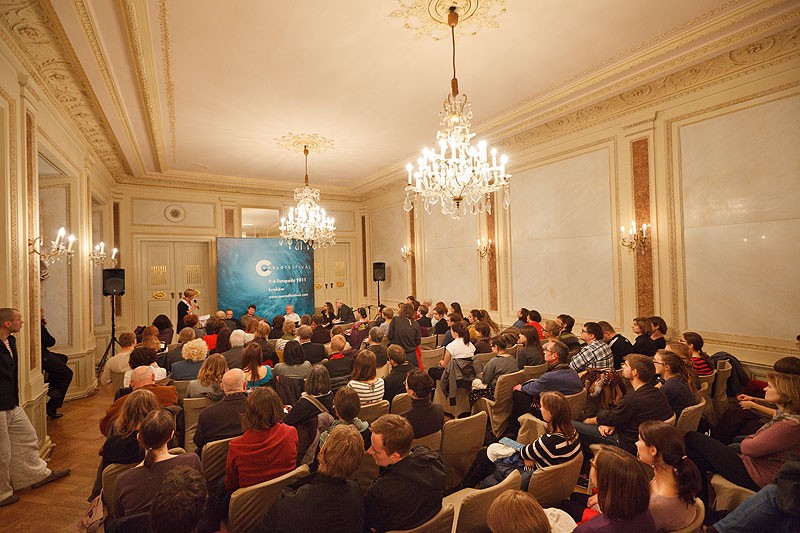 ‘There are many stereotypes about translation and getting to know foreign literature,’ Adam Pomorski said. ‘Why, for example, should we learn about Lithuanian literature? There is nothing for us there, some say.’

Pomorski also said that the problem of translation and foreign cultures lies in a concrete: the text. ‘We cannot go for a psychological Yalta. We must remember Poles are different from Lithuanians and Czechs. Even Russians are different, though it’s hardly believable,’ the translator of Dostoyevsky observed self-ironically. ‘We must get rid of the stereotypes of foreignness, and for this we need concretes and texts.’

Susan Bernofsky, a translator from German into English living in New York, emphasised that what is important is not if we translate AT ALL, but HOW we translate. She brought up the idea of translation proposed by Frederic Daniel Ernst Schleiermacher, a German philosopher, who at the turn of the 18th century claimed that translation is political in nature.

Bernofsky also took up the issue of respect in translation. She spoke about the mechanism of ‘domestication,’ in which concepts existing in a foreign language disappear when translated into local conditions. ‘This, with all due respect, is not translation. Such translation erases the differences, and an important element of translation is to transfer something in the area of culture.’ Bernofsky admitted that in the United States, the publishing industry approaches respectful translations with ... hate.

Anders Bodegard, a Swedish translator and a friend of Poland, revealed that in Scandinavia, there is a project bringing together Sweden, Norway and Iceland. ‘Obviously, there are political premises for keeping this up. It allows, for example, a strengthening of the contacts between young Swedish and Icelandic writers.’ Bodegard also said that Swedes learn fewer and fewer foreign languages that have so far been considered to be dominating, such as French. Instead, more and more people are learning Arabic or Chinese.

Andrei Khadanovic was sure that translation is closely connected with politics. The Belarusian poet, translator and essayist said there is a black list of prohibited authors in Belarus, with the names of three translators on it.

But translation cannot be prohibited. When Andrei Khadanovic spoke of ‘white jealousy’ towards countries that take care of culture outside of their borders, he could very well speak of projects like RADAR. This tri-lingual magazine coordinated from the Villa Decius, is not only a prestigious international project, but also makes sure that every text is published in German, Ukrainian and Polish. No wonder, then, that the meeting promoting the latest issue was attended by writers and critics from Ukraine (Kateryna Babkina), Germany (Nora Gomringer) and Poland (Joanna Olech).

The issue of translation and politics – in various contexts –appeared in many of the meetings yesterday at the 3rd Conrad Festival. It had to be one of the basic subjects during the meeting with Eva Hoffman, a Polish-American writer that emigrated with her family to Canada in 1959 and then moved to the United States. She is the author of several books (some of which have been published in Poland), all of which were written in English. Speaking to Tomasz Bilczewski, she talked about the process of introducing the language into the body and individual culture. ‘The mental introduction of English was a very important moment for me. Today, being bi-cultural is becoming something ordinary,’ Hoffman said, speaking of Salman Rushdi or Kazuo Ishiguro. She talked about her bi-culturality in the context of her returns to Krakow and stays in London. ‘In Krakow, I studied at the music school on ul. Basztowa. Today I even walked past it... Music was once my passion. As a child, I had a talent. But I never became a pianist, even though I did not move away from music – by writing about it.’ Hoffman also said that in a wider context, in today’s world, especially in Europe, ‘...there is no exile one cannot return from.’ 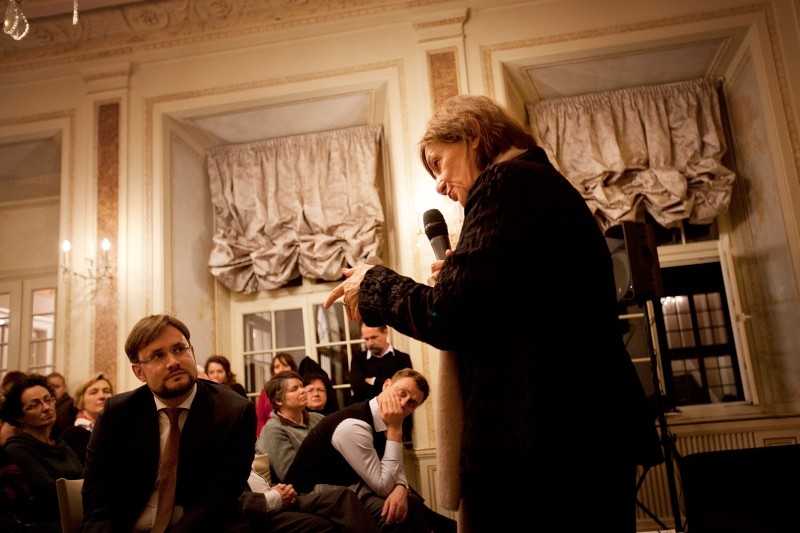 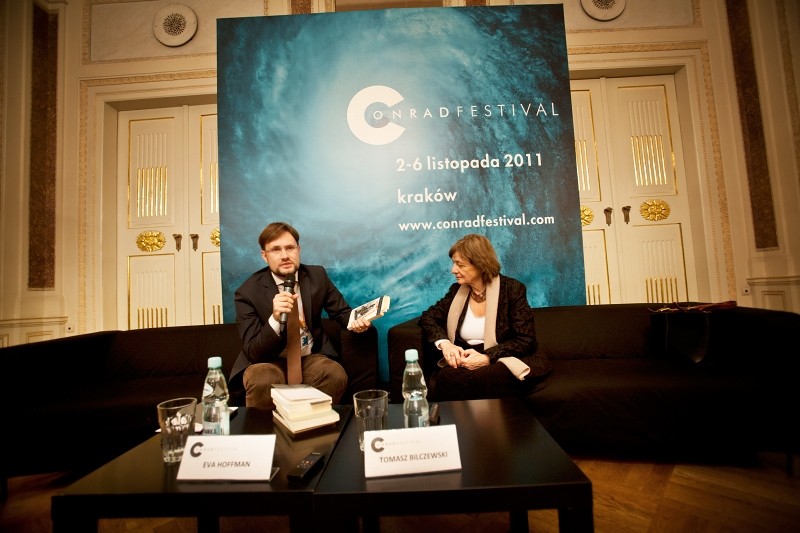 Roberto Calasso, an Italian writer (the meeting with him also took place yesterday), looks at literature through penetration and the challenge it offers to those wishing to learn about other cultures. As Dariusz Czaja writes, ‘Calasso shows it [literature] as a space of historically different forms, always based on the same law of creation that founds it. He shows it as a space full of bewildering tensions, peculiar harmonies, almost electrical discharges that can cause a shiver of ecstasy. It’s a beautiful dance of letters generating divine sparks, with a holy tremble between them.’ 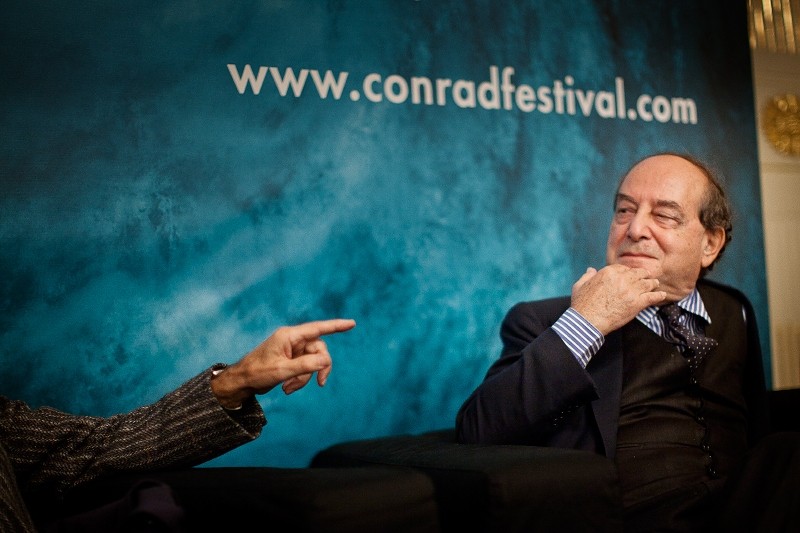 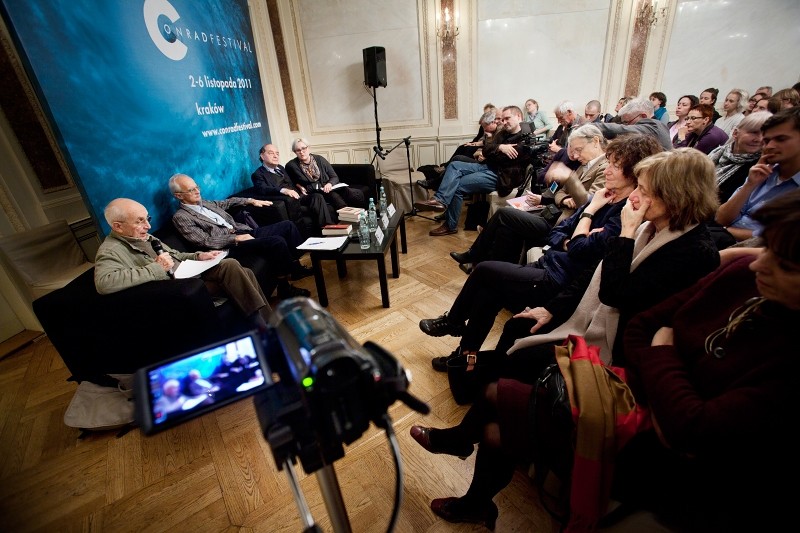 Shivers, in the literary sense, were caused by the stories of Janusz Rudnicki. During the afternoon meeting (also attended by Dorota Segda, who read out passages from Rudnicki’s texts), he told various stories with Krakow in the background. It was quite difficult to decide which were true and which the product of his fantasy. Well, that’s a gift. 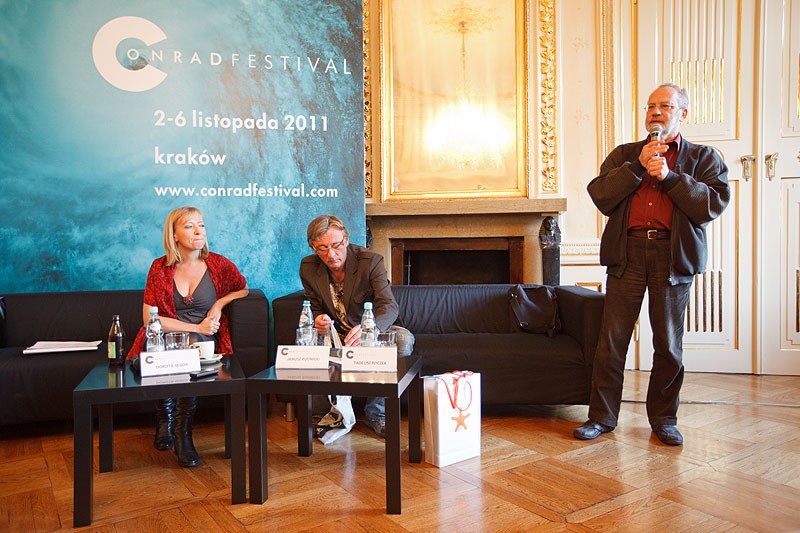 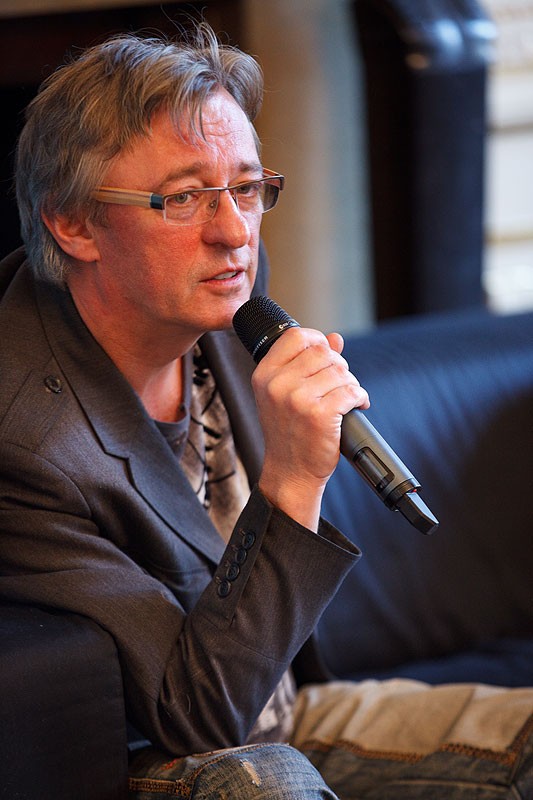 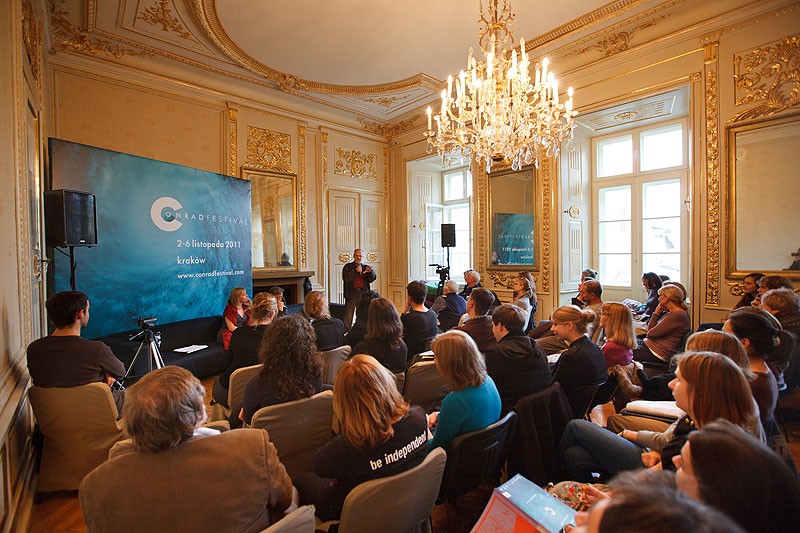 The topos of civility requires the guests to thank the audiences for their invitation and to thank them for their participation. During the Friday meeting, Zeruya Shalev laughed that in Israel such meetings are attended by crowds, but crowds of grey hair. The Conrad Festival, on the other hand, has been attended by crowds of various age and hair colour. Shalev’s words were no exaggeration. Not only the discussion panels, but also lectures and soirees had full audiences. What is more, yesterday, apart from students (the most numerous group), the participants included writers (obvious), animators of cultural life (commendable), journalists (proper line of the editorial team) and even politicians (inspirational). 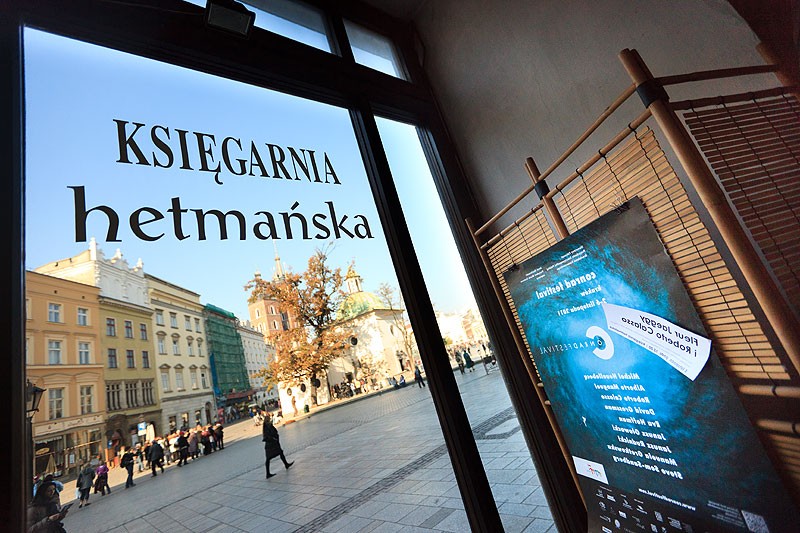 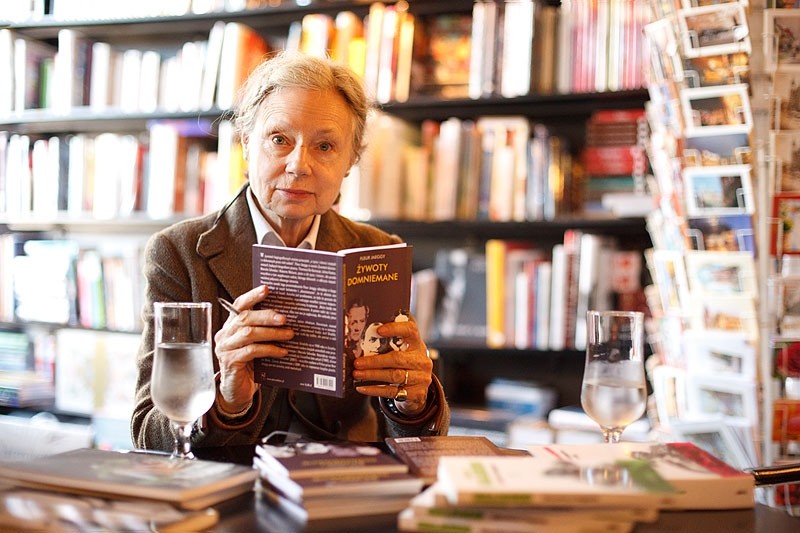 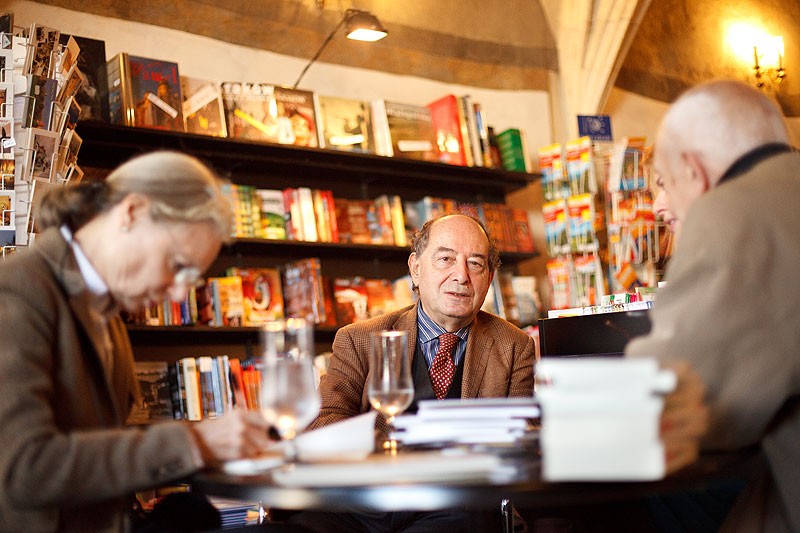 Sunday is the last day of the 3rd Conrad Festival. It will be devoted to the Experienced. At noon, at Bunkier Sztuki, during a Reading Lesson, Joanna Olech will guide the audience through the world of Pippi, the well-known character from Astrid Lindgren’s books. Also at noon, a meeting with Marek Bieńczyk will take place at the Pałac pod Baranami. Two hours later, The Second Life of Opera meeting with Mariusz Treliński will be hosted by Katarzyna Jaworska. There will be two more meetings at the Pałac pod Baranami, one with Manuela Gretkowska (4pm) and one with Maciej Zaremba (5pm). At 6pm, at the HARRIS Piano Jazz Bar, Popoetry, Brian Patten’s soiree, will take place. At 7pm, at the same venue, there will be a concert by Tadeusz Sławek and Bogdan Mizerski, and at 7.30pm, at the International Cultural Centre, Katarzyna Kubisiowska will host the meeting with Janusz Głowacki.