The meetings with Polish authors, Marek Bieńczyk, Manuela Gretkowska, Janusz Głowacki, and a discussion with Maciej Zaremba dominated the last day of the 3rd Conrad Festival. Have we already said that the audience did very well? Yes, we have. But we must say it again: literary events of this type in Krakow have not enjoyed such a large audience in years.

On the Sunday afternoon, in a crowded room, Marek Bieńczyk confessed that his university nickname was ‘the cultured jazzman’. ‘Can a jazzman be uncultured?,’ Ryszard Koziołek, the host, doubted. ‘Yes. Miles Davis was uncultured because he turned his back on the audience.’ The discussion with Bieńczyk, a literary historian, essayist and writer, was bound to touch many different areas. Jazz was a subject, but so was philosophy – for example when talking about writing the novel Tworki and then reading it after a few years. ‘With time, I understood that writing is not expressing the inexpressible, but inexpressing the expressible, that is discovering things that have already been expressed.’

It was obvious that there would be questions about Bieńczyk’s recent novel, Książki twarzy, which was summed up by Dariusz Nowacki in the Gazeta Wyborcza in the following way: ‘Winnetou, Baudelaire, Chandler, Agassi, Beenhakker – all of those are Marek Bieńczyk’s “friends”. In his latest volume of essays, the writer presents his literary and existential profile.’

‘Książki twarzy is a sort of a melancholic’s Facebook,’ Ryszard Koziołek, the host, looked for an analogy, adding that ‘For you, every book is an invitation to a friendship.’ Bieńczyk replied that a face is for him a self-powering element of sense. ‘For me, a face is an excellent place to see senses surfacing like ants. I am most interested in what denies these senses. The important thing is the meeting between a strong subject expressed on the face and what this subject insults or distorts. But I could also put some wine in front of a face…,’ Bieńczyk, a connoisseur of wine and author of several texts about them, said.
Speaking of foodstuffs: the participants of the 3rd Conrad Festival had a hard nut to crack choosing whether to attend the meeting with Manuela Gretkowska (‘A very nice meeting, thank you very much!’) or the one with Maciej Zaremba. The flow of people between the two rooms at the Pałac pod Baranami had no end. 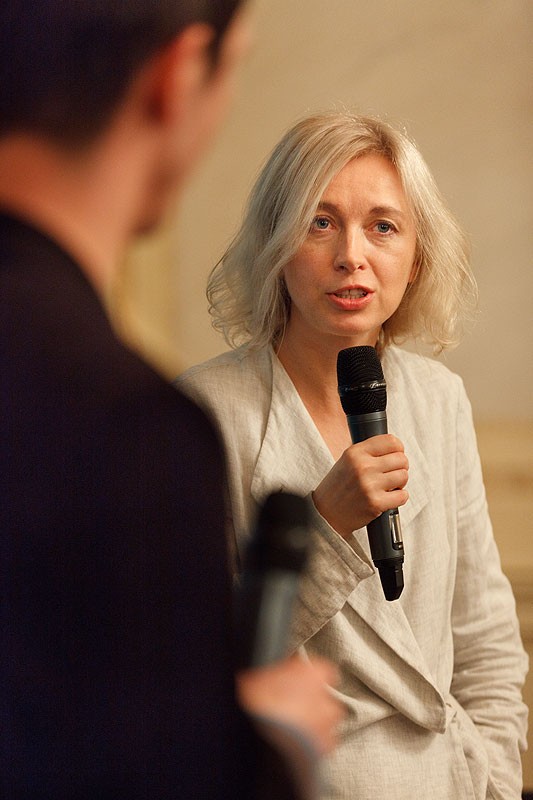 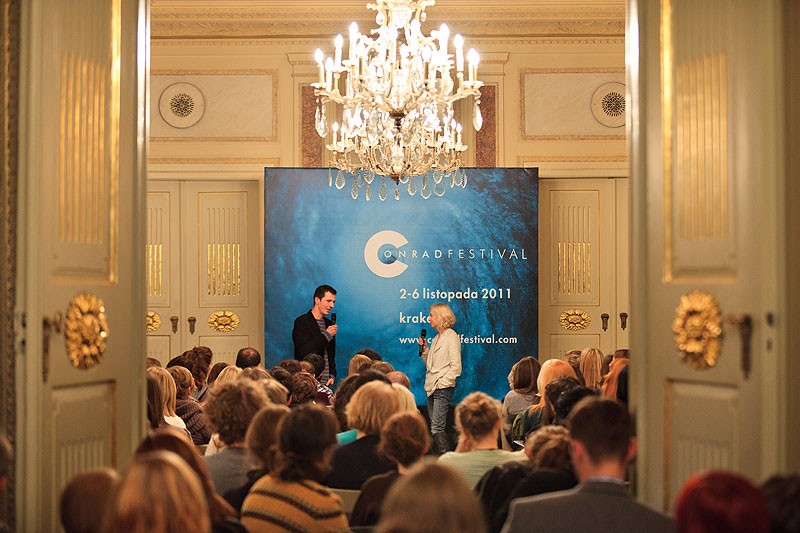 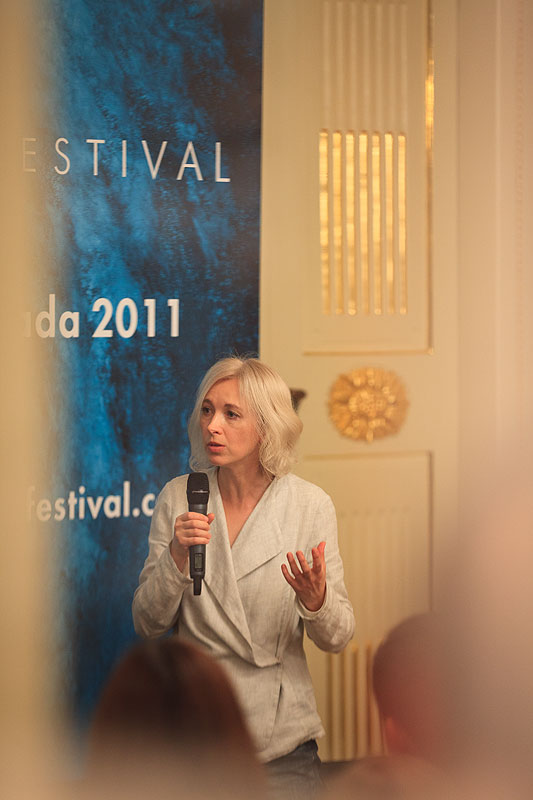 Maciej Zaremba, a sensitive and insightful reporter, ‘our man’ in Sweden, spoke in a way that dispelled the myths of the Scandinavian paradise. No wonder – in his book, Czyści i inni, he revealed the truth about compulsory sterilisation carried out by the Swedish state on thousands of citizens for nearly 40 years in the mid-20th century. A lot was said in terms of eugenics rather than literary culture. ‘I am not promoting disability, but I can’t say that someone deaf or blind is less happy than I am.’ 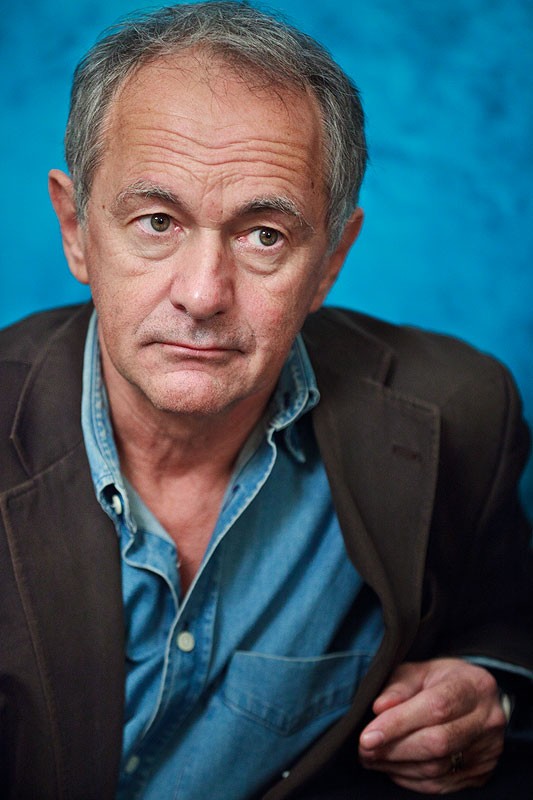 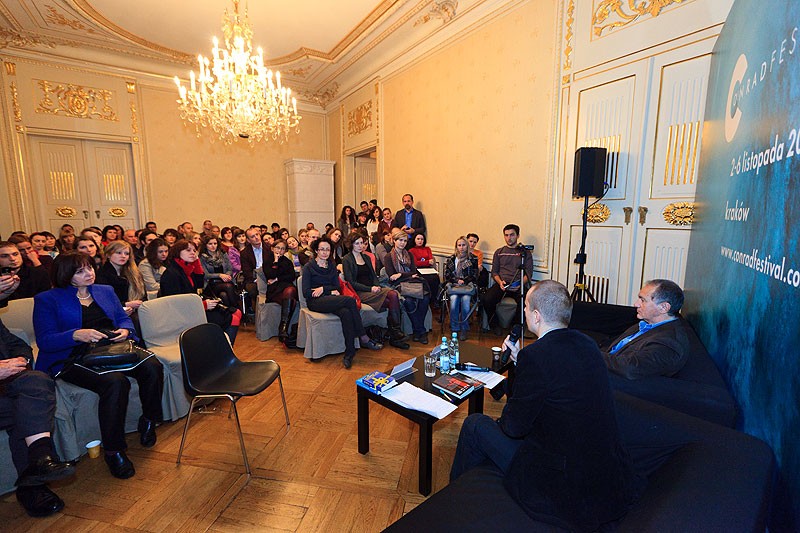 Zaremba also brought up Tomasz Janiszewski, a pre-World War 2 physician, promoter of social hygiene and a supporter of eugenics. Janiszewski is said to have been the prototype for Tomasz Judym, the physician from Stefan Żeromski’s Ludzie bezdomni. ‘When I read the novel, I noticed the eugenic discourse myself. Judym wants to save people because they appal him.’ A separate part of the meeting with Zaremba was devoted to the series of reportages, Polski hydraulik. ‘This book is a guide through social pathologies of modernised countries, such as Sweden.’ He gave bureaucracy as an example, with indifference as a sign of equal treatment of all citizens. ‘We will experience that here quite soon, as well,’ Zaremba predicted. He also added, slightly self-ironically, that he had internalised certain Swedish features, such as the Protestant work ethic. ‘I feel guilty when I’m not doing anything useful.’ 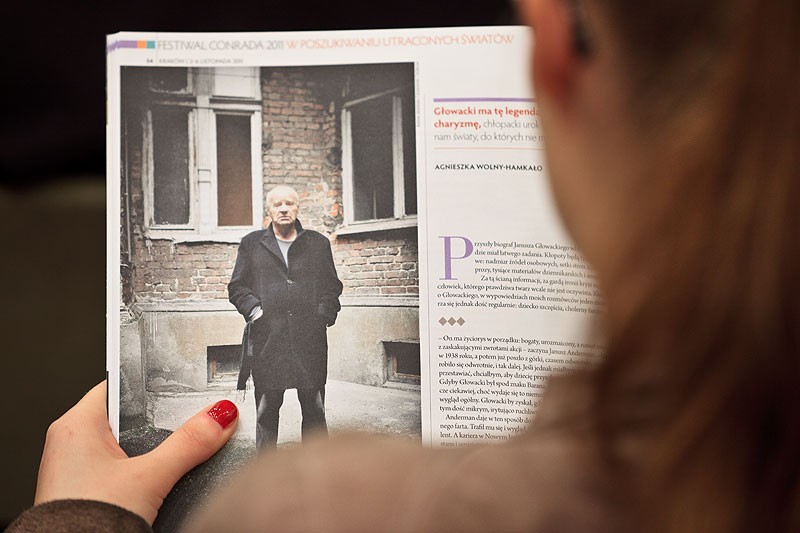 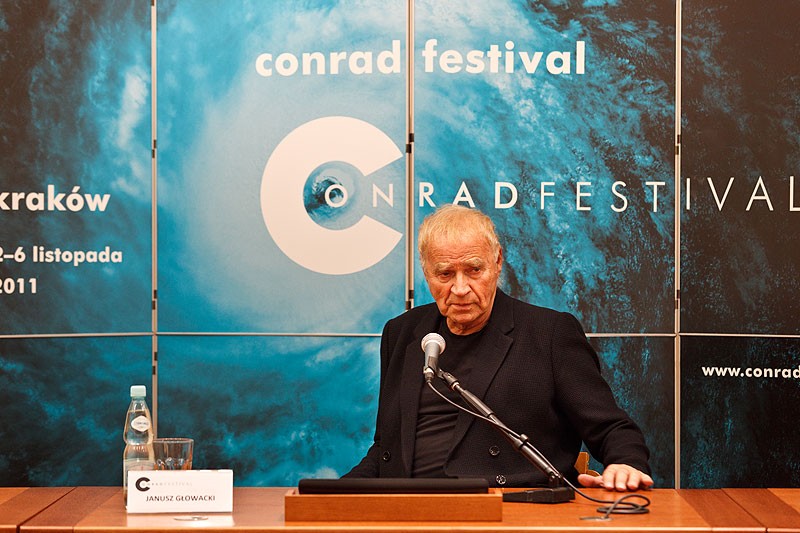 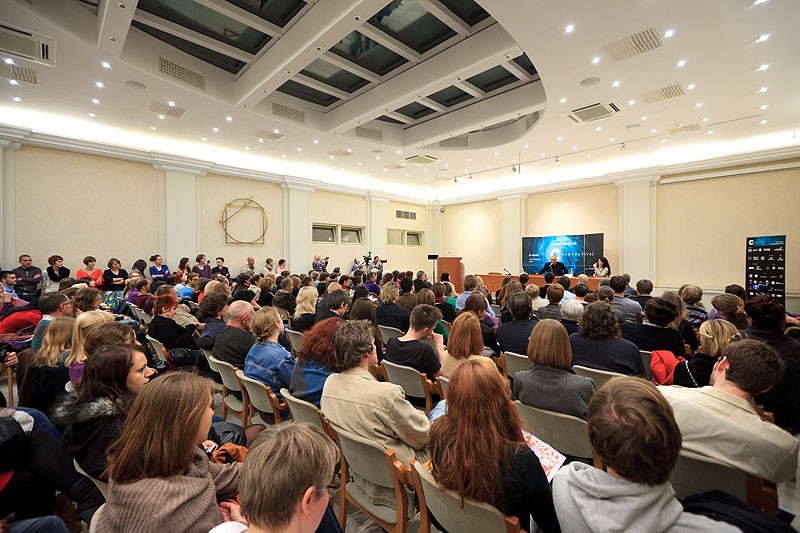 Janusz Głowacki displayed full self-irony, and sometimes even more. Crowds were natural in this case, as everyone knew that he would immediately enchant the audience with his stories about life. Katarzyna Kubisiowska cleverly started the meeting by asking about a seemingly simple thing: experience. In this way she referred to the motto of the last day of the festival. ‘Everyone in Poland has experiences,’ Głowacki said, and it was clear that the evening was his. ‘They say that experiences are ambivalent. This means that “I experienced something” and “life has tried me”. But there are also some very nice experiences,’ and all was clear again. ‘If life had not tried me, I would have nothing to write about.’

Głowacki left Poland some thirty years ago. This coincided with the political and social crisis of the early 1980s in Poland. For Głowacki, emigration was the start of a new life at the age of forty. ‘I found myself on shaking and unknown ground. This might sound interesting, but I do not wish this to happen to anyone. Luckily, I have a self-ironic approach to life.’

Głowacki confessed that his beginnings in America weren’t easy. The breakthrough came when his texts were recommended by Arthur Miller. ‘When he saw me, he said “God, what a fantastic European coat”,’ Głowacki said of the meeting with Miller.

‘Contrary to popular belief, America is not open and waiting for everyone,’ Głowacki observed bitterly. ‘They are self-sufficient. Staging a play requires enormous amounts of money. A Broadway production may cost up to several million dollars. So producers are afraid.’

Głowacki said that his success, also in the financial aspect, came when Antigone in New York and Hunting Cockroaches became popular. At a certain time, Głowacki’s works were staged at fifty theatres across the United States. ‘American democracy is incredibly complex,’ Głowacki said of the good and bad sides of his American way. ‘They give you two years. If you can achieve something in this time, this means you are going to be successful. You have to remember, though, that the money made by authors there is not bewildering. Polański did well. For some time. Writers in the United States teach courses and classes at universities. I do it myself, even though initially I was discouraged because I had to read several dozen plays a few times over. And those were bad plays.’

There were no signs of discouragement among the audiences at other events of the last day of the 3rd Conrad Festival, that’s for sure. In spite of difficult conditions (there was never enough comfortable space for everyone), lots of people came to the Harris Piano Jazz Bar to see Brian Patten’s soiree and the concert by Tadeusz Sławek and Bogdan Mizerski. 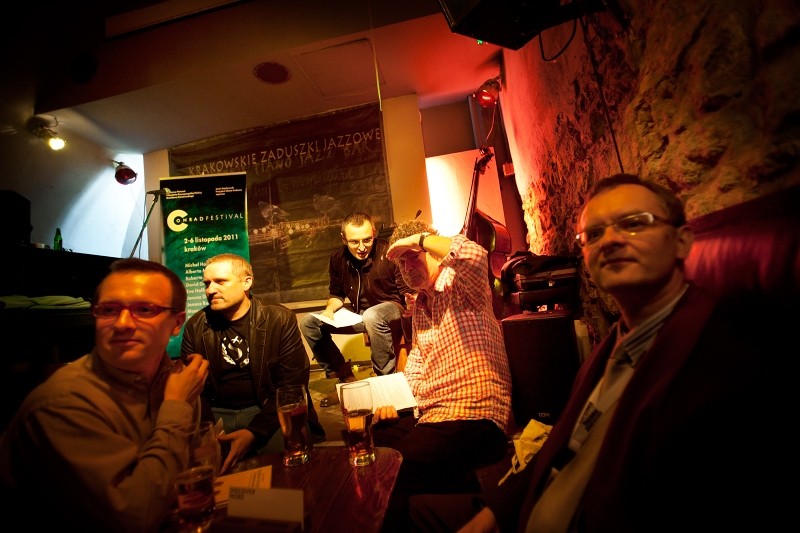 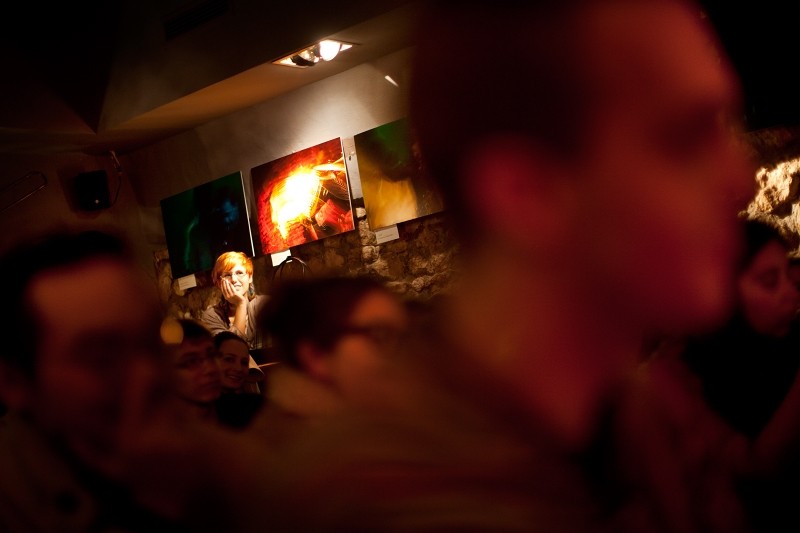 ‘Approximately 100 artists came to Krakow and about 50 events were organised in connection with the Conrad Festival,’ professor Michał Paweł Markowski, the artistic director of the event, said during the last festival meeting. The total audience is estimated at several thousand people. These numbers are impressive, but so is the unrest and the hunger for more caused by many of the meetings. This positive unrest is a great preparation for reading the reality (and the texts) the organisers spoke about for five days. It also means waiting for the next edition of the Conrad Festival of Literature. It’s just a year, however. 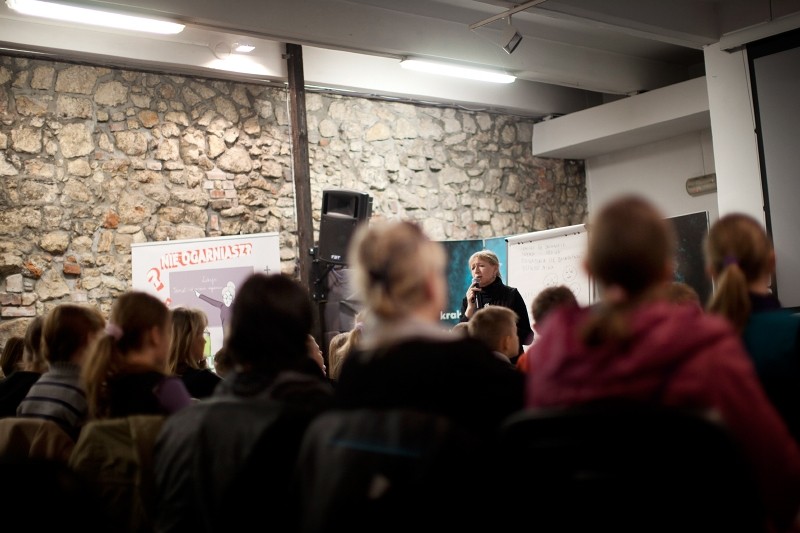 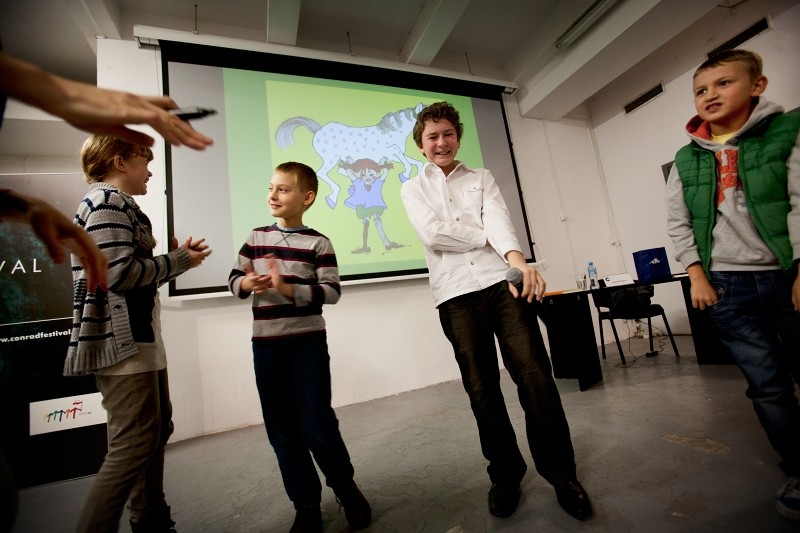 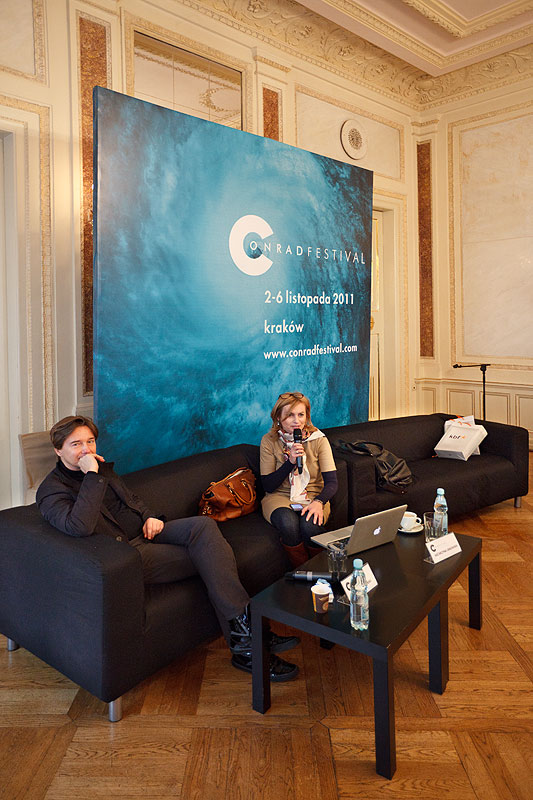 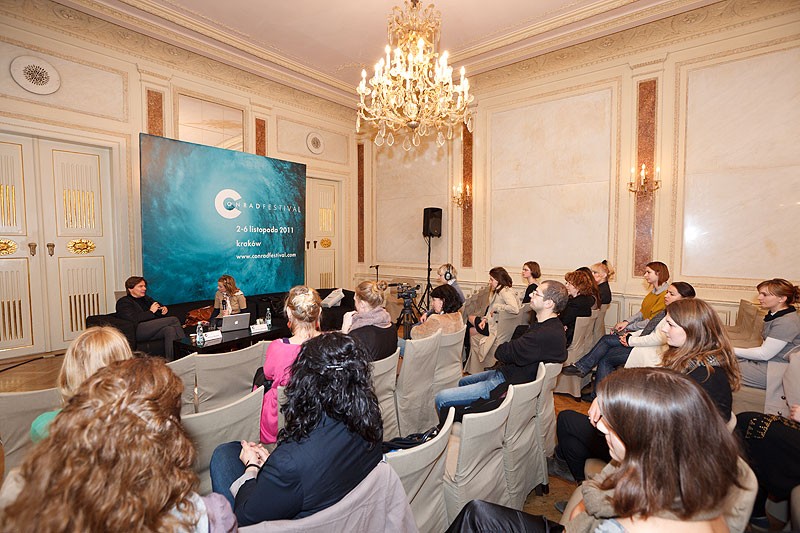