An unusual, gigantic bookshelf has appeared on the facade of the building at ul. Traugutta 3a, in the viscinity of Pl. Bohaterów Getta. The literary mural crowns four days of work by the participants of the Literary Graffiti // TYPOMURAL workshop, run as part of the Free Reading Zone campaign, which has the Krakow Festival Office as its partner. The mural will be officially unveiled at 11 am on Monday, the 28th of November. The project will be presented by Aleksandra Toborowicz and Artur Wabik, artistic supervisors of the mural. 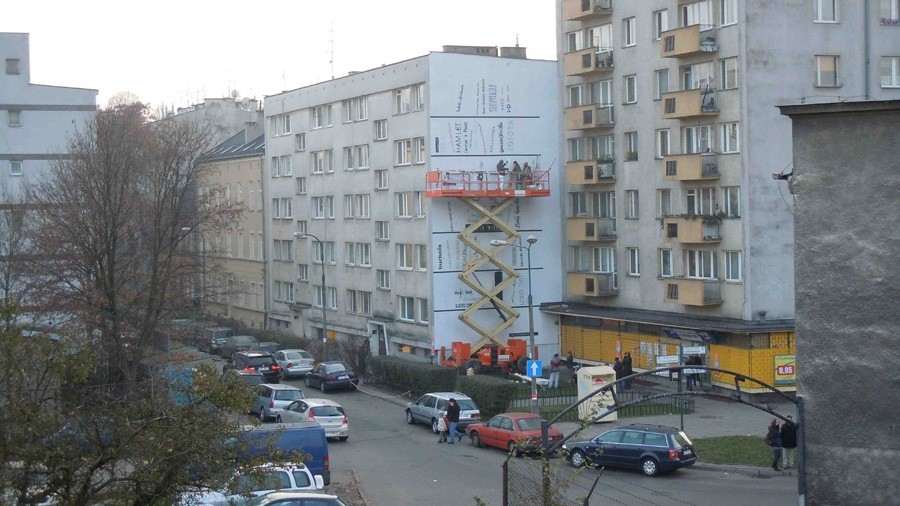 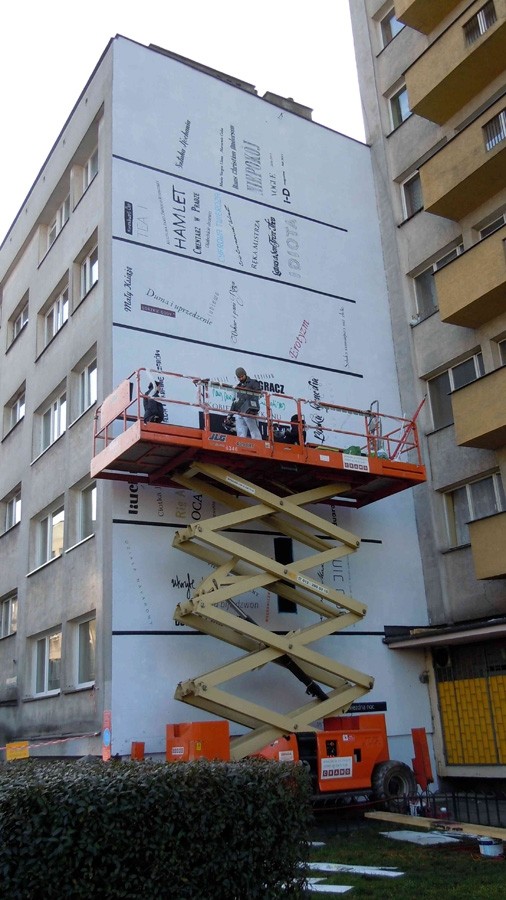 So, why the mural? In October, the ZNACZY SIĘ Gallery hosted the LITERARY GRAFFITI // TYPOMURAL workshops for those interested in graphic design and typography as part of the Free Reading Zone campaign. During the workshops, a group of participants turned the gallery space into a bookshelf: stencils were prepared, typefaces were tested, and details were touched up. Later, a group of young artists  (Karolina Źrebiec, Artur Blusiewicz, Paulina Lichwicka, Joanna Kogut, Weronika Kasprzyk, Ewa Lewandowska, Teoniki Rożynek, Pio Kaliński, Aleksandra Piórek and Anna Mielniczek), moved the project into the urban space under the creative supervision of experienced Krakow artists Aleksandra Toborowicz and Artur Wabik.


The mural, covering an area of 150 square meters, bring to mind a library bookshelf densely packed with books. Workshop participants designed the books' spines - though only titles and/or authors' names and written elements, without drawing the edges or outlines of the individual volumes. Each participant wrote their favourite titles using their own typefaces or ready-made letters. While making the mural, the titles were enlarged and painted on the wall by means of selected techniques (stencilling, collage, letters cut out of paper, painting, calligraphy etc). In this way, the books make up a large-scale typographic collage consisting of shelves created by each artist.


Thanks to their collaboration with the Kabel Housing Cooperative, the wall of the building at ul. Traugutta 3a was then turned into a large literary mural. The venue was chosen not by accident - it is situated in a district of Krakow that is attractive to tourists and residents, on the route from Podgórze/Kazimierz to the MOCAK Museum of Contemporary Art in Krakow and in the proximity of Mirosław Bałka's sculpture AUSCHWITZWIELICZKA.


Artur Wabik (born on the 27th of January 1982 in Krakow) is a Polish artist, curator, columnist, a researcher of pop culture and a publisher of comic books and fantasy literature. Since the 1990s he has been associated with street-art and has created murals and installations in the public space. From 2001 to 2005, he studied at the Art History Institute at the Jagiellonian University in Krakow, and from 2002 to 2004, he worked as an artistic director of the students' art-e-strada New Technologies in Art Festival. He is an originator and curator of three editions (2003, 2004 and 2010) of the interdisciplinary art project entitled Komiks na Ścianach (Comics on the Walls), being an encounter of comic-strip and graffiti aesthetics (participants of the project include Przemysław Truściński, Jakub Rebelka, Dagmara Matuszak, Patryk Poślednik, Mateusz Kołek and Julius Luge). Since 2003, Wabik has been an editor-in-chief of the Atropos Publishing House, specialising in publishing comic books and exclusive, richly illustrated collector's albums. In 2004, he edited and published an anthology of Polish web-based comic strips entitled Komiks w Sieci (Comic books on the Net), which discloses the phenomenon of comic-strip blogs by presenting such bloggers as Agata 'Endo' Nowicka, Bartek 'Belle' Felczak, Jacek Karaszewski, Ernesto Gonzales, and the 'Pvek' collective. In March 2005, he published Melinda - a graphic novel that is the fruit of the collaboration between legendary English writer Neil Gaiman and the Polish illustrator Dagmara Matuszak. In subsequent years, his collaboration with Dagmara Matuszak resulted in publishing luxury editions of two books - Andrzej Sapkowski's Maladie and Neil Gaiman's Anansi Boys. Wabik also contributes articles on pop culture to various magazines, including the interdisciplinary Autoportret. Pismo o dobrej przestrzeni magazine, published by the Krakow-based Malopolska Cultural Institute. Since May 2010, he has run a contemporary art gallery at ul. Zabłocie 23 in Krakow, which is based in a post-industrial building on the premises of the former Miraculum factory (the 'Barrackenwerk' before that).


Some of his artistic works include:


2009 - Boże strzeż mnie przede mną - A mural created in collaboration with Patryk Poślednik at the Śląsko-Dąbrowski bridge in Warsaw on the 65th anniversary of the Warsaw Uprising.


2009 - John Runnings. The Berlin Wall Walker - A diorama made of Lego blocks to commemorate the 20th anniversary of the fall of Berlin Wall (shown at the Delikatesy Gallery in Krakow). The work refers to the person of John Runnings - an American pacifist who practiced passive resistance and is known for his campaigns for the unification of Germany, in particular his activities in 1986-1989 that directly referenced to the wall.


2010  - 12 dziewczyn, w których się kochałem - A video installation collage of images of twelve virtual females that the artist borrowed from animated films, comic strips, computer games and TV science-fiction series (shown at the Zbiornik Kultury Gallery in Krakow). The piece is a record of a formative cultural experience - namely adolescence amid the icons of pop-culture icons in the 1990s in Poland. The work explores such themes as the formation of a male's sexual and emotional identity based on patterns of femininity that do not exist in the real world, and in a broader perspective, the image of woman in pop culture, both from aesthetic and erotic viewpoints.


Aleksandra Toborowicz - Born in 1983 in Katowice, in 2008 Toborowicz graduated from the Lettering and Typography Studio at the Academy of Fine Arts (the Faculty of Graphic Design), where she now works as an assistant lecturer. She works as a freelance graphic designer, designing mostly for publishing and the web, and is also a contributor to the Znak Publishing House and Korporacja Ha!art. A winner of national and international awards in such competitions as the European Design Awards in Zurich, the Trnava Triennial, Machina Design Awards, Transvizualia, an award at the 2+3D Magazine Review of Best Graduation Works for her website Virtual Museum of Erotic Art in 2009, and Art of Packaging. In 2002, Toborowicz won scholarships from the Ministry of Culture and National Heritage and the Mayor of the City of Częstochowa. She is a curator at the 3x3 gallery, an institution promoting young graphic designers and artists, and has curated the PRO ARTE show at the Academy of Fine Arts Gallery in Krakow (Galeria ASP). In 2010, she won the Młoda Polska scholarship founded by the Ministry of Culture and National Heritage. She is also a member of the Association of Applied Graphic Designers.

Co-financed by the Operational Programme for Civic Initiatives Fund