The latest issue of Magnes magazine, the weekly supplement to Dziennik Polski, features a recapitulation of the last year - TOPS and FAILS 2011. The list includes as many as 9 Krakow festivals. Thank you!

Agnieszka Malatyńska-Stankiewicz awarded the TOP 2011 title to the Film Music Festival, above all for "...the opening concert, the first European show of the Japanese composer Joe Hisaishi, dubbed the John Williams of the Orient." The famous Japanese composer led the Sinfonietta Cracovia while playing piano and his music proved extremely European.

Rafał Stanowski's TOPs 2011 are the Off Plus Camera and the Selector Festival. "There were stars (Roth, Bachchan, McGowan), outstanding films (Small Town Murder Songs), there was an atmosphere of a true film feast," says Stanowski about the Off Plus Camera. There was a great audience, too! And, fortunately, no tragedies or natural disasters happened." The editor justifies his choice of the Selector Festival as follows: "We could actually repeat what was said of the Off Plus Camera, replacing the word 'film' with 'music.' The Selector has grown up and hopefully it will make an attempt at dethroning the Open'er."

Łukasz Gazur also recognises the Divine Comedy Festival, commenting on his pick as follows: "The festival took on shape and gained an important place on the theatrical map of Poland. We have seen Rainbow Stand 2012 by the Strzępka - Demirski tandem, Garbaczewski's The Sexual Life of Savages and Klata's A Piece on Mother and Fatherland. The Divine Comedy returned to its 1st edition roots -  it attracted an interesting show from abroad and focused on presenting premieres. Once again a huge success!

Paweł Gzyl recommends four Krakow events: the Unsound Festival, Selector Festival, Coke Live Music Festival and the Sacrum Profanum. "Once again, Mat Schulz and his partners presented Krakow audiences during the Unsound Festival with the latest trends in experimental music. It is also worth mentioning that the veterans proved to be more interesting than the young artists." About the Selector Festival: "The youngest Krakow music festival is slowly defining its format. An outstanding set of oldies from The Orb on the one hand, and an energetic concert by young Katy B on the other." Regarding the Coke Live Music Festival: "We could see how polite alternative rock is during the concerts by Interpol, Editors and White Lies. How big a hip-hop star's ego is we could learn during the endless performance by Kanye West." About the Sacrum Profanum: "...with Steve Reich, it is quite hard to tell if we deal with art or some swindle. But Aphex Twin's performance was quite spectacular."

Marcin Wilk also picked two literary festivals for his TOPs 2011, which consists of the Conrad Festival, Milosz Festival and the Off Plus Camera independent cinema festival. "Huge crowds at both Conrad and Milosz Festivals. In this case, the statistics definitely don't confirm the decrease in readership. It is quite heartening," comments Wilk, enlarging his TOPS 2011 list with Off Plus Camera. "Independent cinema - by definition - must be more interesting than the mainstream. Especially so, if its participants include the biggest players. It is a pure joy for eyes. And for ears, too."

Read a full chart of TOPS and FAILS 2011 according to Dziennik Polski. 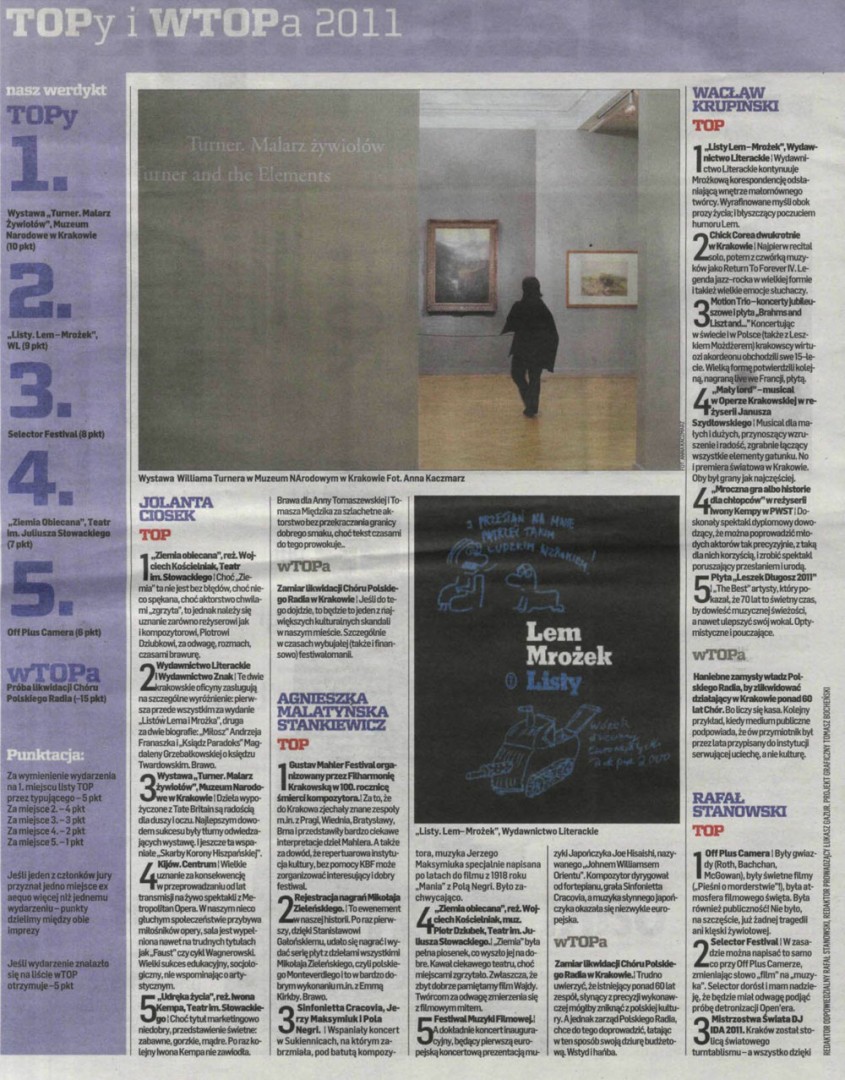 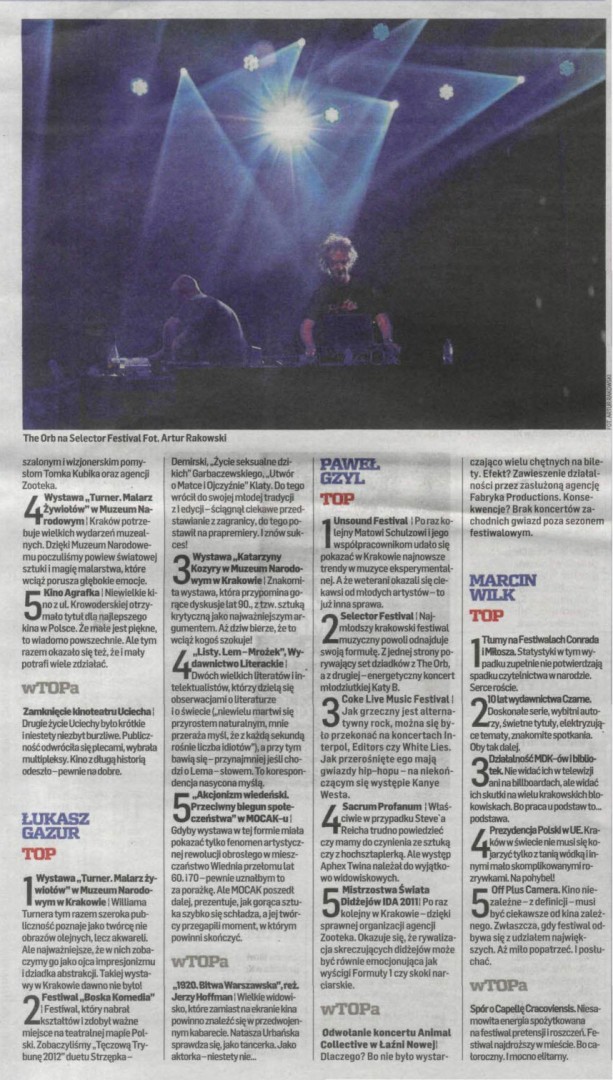