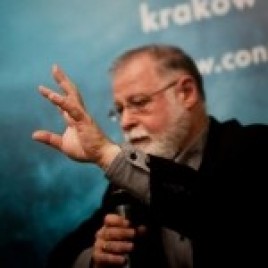 Canadian-Argentinian writer, essayist, editor and translator, author of numerous anthologies. As a 16 year-old, he earned extra money after school in the famous library Pygmalion in Buenos Aires, where he met Borges. He became one of Borges' personal readers (the author of Dr. Brodie's Report suffered from blindness, which made him incapable of reading). Manguel, as an ambassador's son, moved constantly from one place to another. He mastered his native tongue only at the age of 7 (until then having communicated in English and German). After he left Buenos Aires, he lived in France, England, Tahiti and Canada. In 2000, he bought a small abbey on the Loire River, where he resolved to live. In Poland and throughout the world, he is mostly known as the author of the bestselling A History of Reading, wherein he states: “Populist regimes seek to deprive us of memory, thus they see books as unnecessary luxuries. Totalitarian regimes do not want us to think, thus they prohibit, threaten and censor. Both regimes want us to be stupid and to submissively agree to our degradation. That is why they encourage us to consume rubbish cultural products. Under such circumstances, reading becomes a subversive activity.” Manguel makes us aware that everybody changes under the influence of reading and each book read impacts human life. He also shows this in his well-known publication on the most significant pieces of world literature – Homer's the Iliad and the Odyssey: A Biography (Polish translation by Hanna Jankowska published in 2010). Manguel was a guest of the 2nd and 3rd day of the Festival.