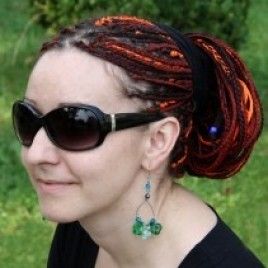 Painter, graphic artist, illustrator and designer of books for children and adults. Author and director of animated films and commercials. Owner of Krakow’s Cafe Szafe coffeehouse and founder of the Burza Mózgów Foundation. She graduated with a distinction in Painting from the Academy of Fine Arts in Krakow, the studio of Professor Leszek Misiak, as well as in Graphics with her major in Animation, under the supervision of Professor Jerzy Kucia. She completed a PhD programme at the Academy of Fine Arts in Warsaw in Professor Maciej Buszewicz’s studio of book design. The work on her doctoral degree resulted in her book Kobiety i Schulz being published in 2016 by Słowo/obraz/terytoria Publishing House. She designs and writes books, advertisements; she holds numerous workshops and lectures for children and adults. She is the author of corporate identity and visual setting for the Children's Literature Festival. She received numerous awards and scholarships, including Professor Jan Szancenbach Scholarship for a young colourist in Paris, Professor Janina Kraupe-Świderska scholarship For a woman-painter in Paris, the scholarship of the Mayor of the City of Kraków, Hanna Wojterkowska-Haber scholarship for an outstanding thesis in 2000, Talens company award, nominations for IBBY awards. She is the author and director of three animated films: Czesława woli Wiesława, Pierwsze dni z życia Kaki and Felicjanek 10, produced in the Animated Film Studio in Bielsko-Biała and co-financed by the Polish Film Institute in Warsaw. She has exhibited oil paintings, illustrations and artistic installations, such as Projekt szpilki (Project Stilettos) and Emeryty (Project Pensioners); (www.projektszpilki.pl), in Poland and abroad (USA, Russia, Ukraine, Taiwan, the Netherlands, Czech Republic, Slovakia, Germany).