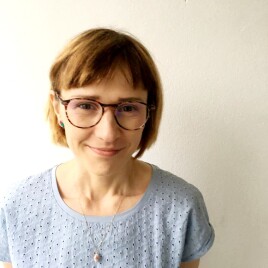 Originating from Opole, she graduated in Polish philology and holds a PhD in humanities from the University of Wrocław; member of the Polish Literary Translators Association, translator of the Estonian literature. This profession combines her greatest fascinations: language, literature and Estonia. Having studied there and worked as a Polish language teacher at the University of Tartu, she often returns to her favourite country, visiting friends and Estonian bookshops.

In 2020, her translation of Andrus Kivirähk’s acclaimed novel The Man Who Spoke Snakish   was published by Marpress in the ‘Baltic’ series. This title was short-listed for the ANGELUS Central European Literary Award and included in the final five nominations for the New Europe Ambassador Award. In 2021, Wydawnictwo Literackie published another iconic Estonian novel of this author: Rehepapp, ehk November (November Currants) translated by Anna Michalczuk-Podlecki as Listopadowe porzeczki. The novel is currently on the short-list for the ANGELUS Central European Literary Award.

On November 26 of the same year, the Ministry of Foreign Affairs of the Republic of Estonia honoured the translator with a letter of gratitude for her “long-standing contribution to the translation of Estonian literature and bringing Estonian literary culture to Poland”.

Michalczuk-Podlecki’s most recent prose première for adults is the translation of Paav Matsin’s novel Gogolowe disco (Gogol’s Disco) (Marpress 2022); in the field of literature for children and youth, she has translated Maarius, maagia ja libahunt Liisi (Marius, the Magic and the Werewolf Liisi) by Reeli Reinaus(Widnokrąg 2022). She is currently working on new titles for adult readers (including Serafima ja Bogdan [Serafima and Bogdan] by Vahur Afanasjev) and for children and youth (including works by Reeli Reinaus and Anti Saar).

Delegate and member of the Board of the Southern Branch of the Polish Literary Translators Association.