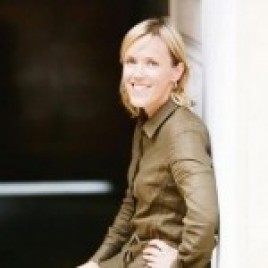 One of the most popular and most translated Swedish authors of crime novels, author of a series with prosecutor Rebecka Martinsson as the main character. She was born in Uppsala, but spent her childhood and youth in the far North, in Kiruna. She returned to Uppsala to study. For several years, she worked as a lawyer specialising in tax law. She debuted in 2003 with a crime novel entitled Sun Storm which became a best-seller and for which she was awarded a prize for the best debut of the year by the Swedish Crime Writers’ Academy (Svenska Deckarakademin). A year later, members of the Academy recognised Åsa Larsson’s next novel, The Blood Spilt, as the best Swedish crime novel. After the success of the first book, she devoted herself completely to writing. Subsequent parts of Rebecka Martinsson’s adventures are: The Black Path, Until Thy Wrath Be Past, and The Sacrifice to Molok – in Decemer 2012, this last novel was also awarded the title of the Best Swedish Crime Novel by the Swedish Crime Writers’ Academy. Literary critics emphasize Åsa Larsson’s huge literary talent, unique descriptions of the nature of northern Sweden, skilled combination of criminal intrigue and Biblical motifs, as well as convincing psychological portraits of the characters. The writer currently lives in Mariefred, she has two children. She is a granddaughter of famous Swedish skier Erik August Larsson. To date, four books by Åsa Larsson have been published in Poland under the imprint of Wydawnictwo Literackie: The Blood Spilt, The Black Path, Until Thy Wrath Be Past, and The Sacrifice to Molok. Meeting with Queen of criminal novel will take place on 25th october. Hosted by Michał Nogaś.