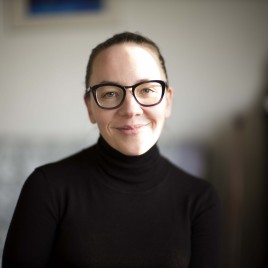 – interdisciplinary artist, doctor of visual arts, writer, lecturer at the National Film School in Łódź She graduated from the Faculty of Directing of the State Higher School of Film, Television and Theatre in Łódź and from the Academy of Fine Arts in Krakow.
Her main areas of inspiration, exploration and creativity include relations between humans and things, language and images, memory and language. In the field of visual arts, the artist takes advantage of the new media – she creates tomographics and tomovideo, using a computer tomography scanner as a graphic and film tool. In the field of literature, she builds narratives from image fragments, which she calls text modules. She published her works in Znak, Załącznik Kulturoznawczy, Književna smotra, and Sic (Croatia), Literatūra ir menas (Lithuania), A2 (Czech Republic), Seedings (United States), Poetry Wales, Modern Poetry in Translation (United Kingdom).
She presented her video and tomographic works at the International Graphic Arts Centre in Krakow, the Greenhouse Gallery at the National Film School in Łódź, Susanne Burmester Galerie in Germany, Trubarjeva Hiša Literature in Slovenia, Gavella Drama Theatre in Croatia, and Kunstnernes Hus in Norway. Laureate of the Nike Literary Award and the Golden Mean of Poetry Award for her book Nakarmić kamień (2016). In 2017, she won the New Voices from Europe project, carried out as part of the Literary Europe Live platform, supporting outstanding European writers after their debut.