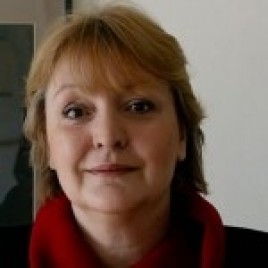 Born in Zagreb in 1949. Professor of Russian literature, critic of culture, writer, essayist, columnist, translator (she has translated the works of, among others, Boris Pasternak and Daniil Kharms), screenwriter. Half in earnest, half tongue in cheek, she recalls the national stereotypes and local, ethnic prejudices, and claims she grew up in an environment populated by curious creatures: Bulgarians were "blacks", Gypsies stole little children, Italians ate cats alive, and Montenegrins were not humans at all, but turtles. When she left Croatia in 1993 for political reasons, choosing to live and work in the Netherlands and the US (where she teaches creative writing courses, among other things), the issue of multiculturalism and mutual national stereotypes became a frequent subject of her journalistic and essayistic endeavours. She made her debut as a writer with Poza za prozu (A Pose for Prose, 1978). Polish readers are familiar with Fording the Stream of Consciousness (1992, PIW; Wydawnictwo Czarne, 2005), The Culture of Lies (Wyd. Dolnośląskie, 1998; Wydawnictwo Czarne, 2006), Have A Nice Day: From the Balkan War to the American Dream (Wydawnictwo Czarne, 2001), Steffie in the Jaws of Life (Wydawnictwo Czarne, 2002), The Museum of Unconditional Surrender (Świat Literacki, 2002), Thank You for Not Reading (Świat Literacki, 2001). Her name made it to a volume of essays published in 2002 under the title Nostalgia. Eseje o tęsknocie za komunizmem [Nostalgia. An Essay on the Longing for Communism]. Dubravka Ugresic is also an author of three children's books: Mali plamen, Filip i srecia, Kućni duhovi, and a monograph devoted to contemporary Russian literature (Nowa ruska proza, 1980), as well as an anthology of alternative Russian prose Pljuska u ruci (1988). She is a columnist for Die Zeit, NRC Handelsblad, and Lettre International, to name but a few. She has won many literary awards, including the prestigious Heinrich Mann Prize, and has been nominated for The Man Booker International Prize 2005. About essays entitled Thank You for Not Reading she told with Kazimiera Szczuka on Tuesday, 23rd October 2012. Picture: Vinzent Mentzel