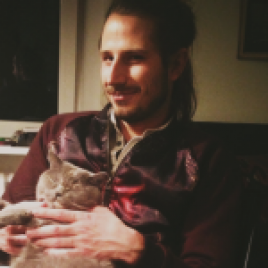 Theatre director. Regarded as one of the most talented theatre directors of the young generation, known for interdisciplinary projects combining elements of performance, visual arts and music. Student of Krzysztof Lupa, awarded with many prizes, including Paszport Polityki (Polityka’s Passport). By means of the most famous titles, such as Demons by Fyodor Dostoevsky or Homer’s Odyssey, he asks questions concerning the condition of human nature, the essence of the contemporary man, the experiencing of critical states. He is the author of the theatrical project Życie seksualne dzikich (The Sexual Life of Savages), created on the basis of a work by Bronisław Malinowski, one of the best known anthropologists of the 20th century. In 2013 Garbaczewski fulfilled his idea of a Polish trilogy, which consisted of: Balladyna with elements of radical feminism, Poczet królów polskich (The Gallery of the Polish Kings), in which history and nation-creative myths are used as ways of manipulation, and Kamienne niebo zamiast gwiazd (Stone Sky Instead of Stars) with Julia Marcell’s music. The performance, which had been supposed to pay homage to the 69th anniversary of the Warsaw Uprising, raised the issue of the detachment of pictures preserved by any memory institution from true history, and of their entering into pop culture. Currently, the director is working on the adaptation of Witold Gombrowicz’s Kronos.