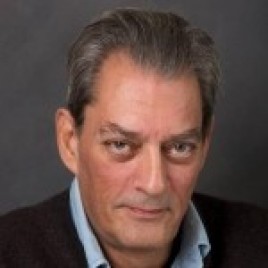 Born in 1947, American writer, essayist, screenwriter, translator, and film director, Paul Auster studied at Columbia University, and lived in Paris and translated French poets, yet as an author he remains closely linked to New York. His career began with published essays (The Invention of Solitude) and poetry, while these were his novels that drew the attention of critics, especially The New York Trilogy, consisting of City of Glass, Ghosts, and The Locked Room published in 1985–1986. Auster weaves stories based on whodunit intrigues, subjected to post-modernist, pastiche transformations within a reality of a mysterious metropolis enshrouded in absurd. The stories of lives of his protagonists - lonely and lost – turn into an investigation of existential questions, with the individual’s identity providing the greatest puzzle. Also later works of Auster are devoted to this type of reflection; many of them touch upon the question of alienation, being lost in the symbolic order, and the sense and significance of coincidences (notably The Music of Chance, 1990, Man in the Dark, 2008, and Sunset Park, 2010). The writer has won a range of awards for his novels, and directed a number of films, including Smoke (with Wayne Wang) and Lulu on the Bridge, to which he also wrote the screenplays. Fot. Nancy Crampton