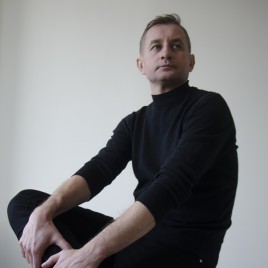 Ukrainian author, poet, opinion writer, and director, recognised as one of the Ukraine’s most influential young writers. He studied the Ukrainian and German languages at the University of Kharkiv, where he defended his doctoral thesis and now teaches about literature. Polish edition of his works have been published, including his book of poetry, Історія культури початку століття (The History of Culture at the Beginning of the Century); his book of prose Біґ Мак (Big Mac); his novel, Депеш Мод (Depeche Mode), which has been compared to James Joyce’s Ulysses, Venedict Yerofeyev’s Moscow-Petushki, and Céline’s Journey to the End of the Night; a book of punk prose about the events of the 1980s and about the period of the last industrial revolution in Kharkiv, Anarchy in the UKR, and Гімн демократичної молоді (Anthem of Democratic Youth) – all of which were put out by the Wydawnictwo Czarne publishing house. In 2009 his book, entitled Відсоток самогубств серед клоунів (The Percentage of Suicides Among Clowns), made its way to the hands of Polish readers, with photographs by Jacek Dziaczkowski (pub. edition.fotoTAPETA). In it, the Ukrainian writer and Polish photographer tell of life in contemporary Ukraine. Zhadan has created his own original style in Ukrainian language poetry and prose – bright, blunt, and highly poetic. He has been honoured with many awards, including the “Bu-Ba-Bu” for the best poetry of 1998, and the Joseph Conrad Award (2009), funded by the Polish Institute in Kiev. He is co-creator of many underground publishing projects, and co-edits the periodical “Gigiena”. His works have been translated in to many languages. At the Conrad Festival he took part in the discussion, Wschód-Zachód (East-West), with Mathias Göritz.Picture: Elżbieta Lempp