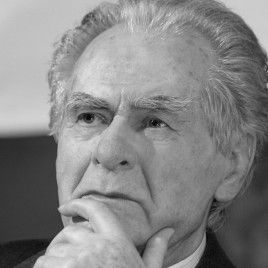 (born 1932) – a novelist and playwright. He was born and grew up in Dwikozy near Sandomierz. He graduated from the Institute of Polish Philology of the Catholic University of Lublin (1956).

For many years he worked in Ludowa Spółdzielnia Wydawnicza [People’s Publishing Co-operative], where he took up an assistant's job and eventually became the assistant editor. In the years 1975-1999, he was the editor in chief of the Regiony quarterly, and later he also managed the Sycyna biweekly.

He is often characterised as one of the last representatives of the peasant current in Polish literature. Particularly his early texts present villagers' lives and the inevitable civilisational and social transformations that the Polish village experienced in the second half of the 20th century. However, Myśliwski avoids the mythologisation and nostalgic presentation of the village and is far from describing it as the lost Arcadia of childhood years. He shows both bright and dark sides of the village, continuously emphasising the key role that it has played in our social and cultural imaginarium.