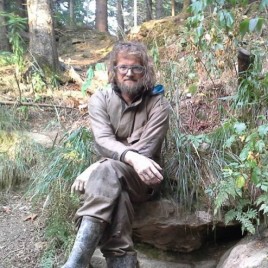 Prose writer, poet, film critic, screenwriter, and speleologist. Graduate of Cultural Studies at the University of Silesia and a doctoral student of Film Studies at Jagiellonian University. In the 1990s, he belonged to the Na Dziko poetry group. Since 1992, he has been publishing his poems and short stories in cultural and literary press (including Dziennik. Polska-Europa-Świat, Rzeczpospolita, Plus Minus, Newseek, Wysokie Obcasy, and Playboy), he also wrote many feature articles and texts about cinema. Cooperates with Tygodnik Powszechny, Res Publica Nowa, and the Kino monthly. Author of screenplays for Magdalena Piekorz’s films Senność and Pręgi. Awarded with the main prize at the Gdynia Film Festival (Pręgi). Author of short story collections: Opowieści słychane (1999), Szkieleciarki (2002), Widmokrąg (2004), and Opowieści przebrane (2005). In 2003, he debuted with his novel Gnój, for which he was honoured with many awards, including the NIKE Award, Polityka’s Passport, and the Krakow Book of the Month Award. Over a dozen publishing houses from various countries, including: France, the Netherlands, Russia, Germany, Croatia, Hungary, Romania, Denmark, Italy, and Macedonia, bought the copyright for the book. As a speleology enthusiast, in the years 1982-2010, he explored more than 800 caves, making several significant discoveries. In 2013, together with Rafał Klimara, Marek Pawełczyk, and Jarosław Surmacz, he received a distinction in the prestigious travel award “Kolosy” for the discovery and exploration of Jaskinia Niedźwiedzia Górna (Upper Bear Cave) and Jaskinia Harda (Haughty Cave). On the last day of the festival he will take part in a discussion Sport is literature between Marek Bieńczyk and Michał Okoński.Picture: Radek Kobierski