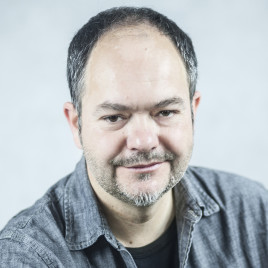 (born 1968) – writer, journalist, publicist, translator, reviewer, photographer, exhibition curator. His texts have been published in the Gazeta Wyborcza daily and the Tygodnik Powszechny weekly. He published, among others, a collection of essays entitled Dno oka (2010), which was a Nike Literary Award finalist in 2011, Stół, jaki jest. Wokół kuchni w Polsce (2011), Jerzy Lewczyński. Pamięć obrazu (2012) and a memoir book Salka, describing the history of the author’s ancestors from the Eastern Borderlands. In 2014, he received the Gdynia Literary Award in the essay category. His latest book Tuż obok (2018), published by Wydawnictwo Czarne publishing house together with the Ethnographic Museum, was nominated for the 2018 Fredro’s Pen award. He co-organises Photography Month in Krakow, as part of which he was the author of such exhibitions as Promieniowanie (‘Radiation’), Tuż obok (‘Close by’)and Chmura (‘Cloud’). In 2015, he was the main curator of the festival, creating a programme of exhibitions whose main theme was “conflict”. He lives in Krakow.