A reading lesson with Grzegorz Jankowicz

In a village of La Mancha. Discussion with Magdalena Barbaruk and Wojciech Charchalis.

Thinking with literature. A meeting with Ryszard Koziołek

On the shoulder of the road. A meeting with Andrzej Stasiuk

Film screening: The Legend of the Holy Drinker

Conrad by Night. A meeting with Marek Adamik, the nominee for the Conrad Award

A reading lesson with Tomasz Swoboda

Joseph Roth and the empire at the edge of agony. Discussion with Elżbieta Jogałła, Małgorzata Łukasiewicz and Joanna Ugniewska.

Is another world possible? A meeting with Ida Linde

In Poland… so where? Discussion with Dominika Kozłowska, Michał Łuczewski, Włodzimierz Nowak and Ziemowit Szczerek.

Film screening: Under the skin

Conrad by Night. A meeting with Magdalena Kicińska, the nominee for the Conrad Award

A reading lesson with Małgorzata Łukasiewicz

A feeling of power. A meeting with Eustachy Rylski

The Conrad Festival in book stores: Ida Linde will read fragments of "You Travel North to Die"

Meeting around the book: The Fantastic Laboratory of Dr. Weigl

Love in dark times. A meeting with Colm Tóibín

Conrad by Night. A meeting with Weronika Murek, the nominee for the Conrad Award

A reading lesson with Agata Bielik-Robson

A toast to our ancestors. A meeting with Wojciech Górecki

Book industries: Booksellers – how to survive on the commercial market?

Several magpies by the tail. Discussion with Stanisław Łubieński and Urszula Zajączkowska.

People from the countryside. Discussion with Radka Franczak, Andrzej Muszyński and Maciej Płaza.

The past in boots. A meeting with Géza Röhrig

A meeting around the publication "Snakes, daggers and rose petals. Polish book illustration"

The Conrad Festival in book stores: Artur Domosławski will read excerpts from "Wykluczeni"

Conrad by Night. A meeting with Żanna Słoniowska, the nominee for the Conrad Award

An ornithological walk with Stanisław Łubieński

A reading lesson with Izabella Chruślińska

42 gardens around the world – landscape architecture workshop with Adam Wójcicki – illustrator of the O.G.R.Ó.D. book

A meeting with Guido Van Genechten

Book industries: Critics – what place do books have in contemporary press?

How to forget the war? A meeting with Vasyl Słapczuk [cancelled]

Excluded. A meeting with Artur Domosławski

Stories of Women, or a meeting with Krisztina Tóth

The heart of Syria. A meeting with Samar Yazbek

Clatter. A reading and conversation with Szczepan Twardoch

Conrad by Night. A meeting with Tomasz Wiśniewski, the nominee for the Conrad Award

A journey to the depths of Earth – artistic workshop with Ola and Daniel Mizieliński, inspired by their book Under ground, under water.

WHAT is an EYE? – or how do we see. Workshop for children devoted to optical illusions

Dead forest. A meeting for children with Adam Wajrak and Tomasz Samojlik

Dead forest. A meeting for children with Adam Wajrak and Tomasz Samojlik

The facts that Adam Wajrak writes great children’s books about the nature, and Tomasz Samojlik is an author of comic books and illustrations are known by almost every child in Poland. However, not many people know that they are neighbours from the Białowieża Forest. They now decided to join forces in their new project: Dead Forest, and its sequel - Undead Forest - planned for spring of 2017, are comic books, the plot of which takes place in the Białowieża Forest. The birds - protagonists of this western-like story - try to protect the wildest part of the forest, much to the chagrin of their enemies - dead wood and woodworms. They will fight alongside the supporters of a clean and healthy forest, where dead wood and woodworms have no place. The book not only contains an engaging and humorous story, but also descriptions of a forest life, written by Adam Wajrak.

Workshops for children age 7+. Admission after registartio via the website of The Literature Festival for Children - a partner of the Conrad Festival: www.fldd.pl. 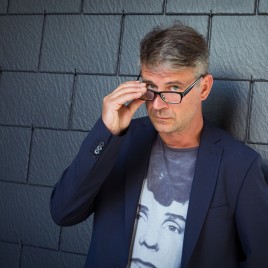 Book industries: Editors – how to cope with working from home?

From there to here (around the anthology "About Them Here"). Conversation with Zofia Król, Piotr Sommer, Małgorzata Szczurek and Marcin Szuster.

The Conrad Festival in book stores: Urban Archipelago. A meeting with Filip Springer

The small ball. A meeting with Marek Bieńczyk

Luminescence. A meeting with Eleanor Catton

Two edges of the language. Meeting with Michael Cunningham and Richard Flanagan.

Meeting about the time with Grzegorz Kasdepke

A reading lesson for adults with Przemysław Czapliński

The Conrad Festival in book stores: Congo – how many stories? A meeting with Félix Kaputu and David van Reybrouck

Doodle with Lama and Sztukolotnia

Book industries: Publishers – how to bring a 70-year old publishing house into the 21st century? A meeting with Jędrek Biegański

How to draw emotions? Artistic workshop with Guido Van Genechten

Whose Africa? Discussion with Grażyna Plebanek and David Van Reybrouck.