The Conrad Award, a literary prize considered to be the most important distinction for debuting prose writers, will be given for the third time.

From the submissions of first books published in 2016, the jury will name five nominees, after which our readers will have the opportunity to decide the winner by participating in an on-line plebiscite. The name of the winner will be revealed in October during the final gala of this year’s Conrad Festival. The prizes are well worth it – the laureate will receive a cheque worth 30 000 PLN and a month’s residence stay in Krakow. The winning book will be also promoted in Tygodnik Powszechny.

The Conrad Award is a part of the municipal programme for supporting debuts in Krakow – UNESCO City of Literature, and is a joint venture of the City of Krakow, Krakow Festival Office, Book Institute and Tygodnik Powszechny Foundation, established in order to promote new voices in Polish literature, inspire interest of wide audience in new books on the Polish market, as well as support the young writers in the difficult period between releasing the first and second book. Last year’s winner of the Conrad Award was Żanna Słoniowska with her novel Dom z witrażem (The House with the Stained-Glass Window, published by Wydawnictwo Znak Literanova). 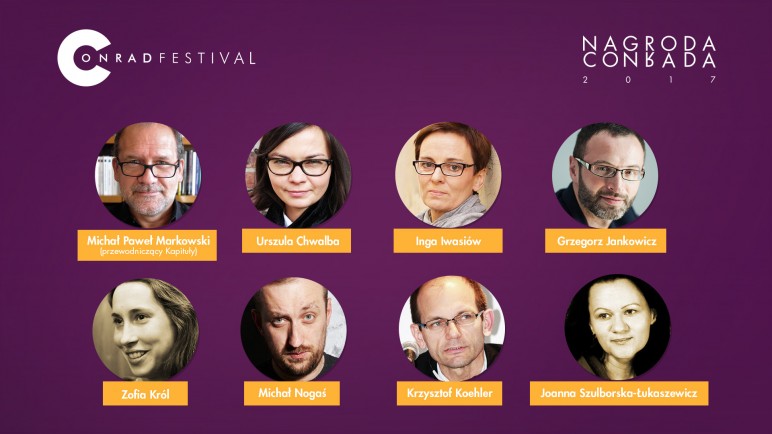 Only the books published in 2016 are eligible to participate in this year’s edition of the contest. They will be read thoroughly by the Jury, which as always comprises: Prof. Michał Paweł Markowski (president of the Jury), Urszula Chwalba, Inga Iwasiów, Grzegorz Jankowicz, Zofia Król, Michał Nogaś, Krzysztof Koehler and Joanna Szulborska-Łukaszewicz (secretary), who will select five nominees. The winner will be decided by the readers in an on-line plebiscite. The official award ceremony will be a part of the Conrad Festival – an event distinguished by Penguin Random House as one of twenty literary events worth visiting. Additionally, during the festival, which coincides with the last days of the plebiscite, the readers will have an opportunity to meet the nominees.

You can find the rules here.